Hell Bent on Getting Sh-t Done

I first made an appointment at the Consulate back in March, when I was supposed to leave Paris, and there were a shit ton of appointments, but I guess kids be getting ready for uni or something because there was nothing open when I went to check, and I ended up having to get some cancelled appointment that popped up during my session. It gave me only two days to prepare for the interview, but it was either now, or two weeks from now, and ain't no one got time for that.
My application to Campus France hadn't yet been completed but they mentioned that you could go before they finished the process so I figured 'fuck it' and made the appointment. Just a heads up, don't try to use Campus France on Safari, Chrome, or Internet Explorer. It turns out the application hadn't been completely validated because the validation button wasn't coming up on IE so when I contacted them to figure out what was what, they said it hadn't been submitted. When I opened it in Firefox, the website was fully functioning.
And FYI contacting them is awful. It's completely email or fax. When I let them know how soon my appointment was though they gave me a phone number. When I called they couldn't find my file so they said if they could locate it they'd process it by the end of the day. I figured if they didn't that would be between them and the Consulate. It wasn't my fault if they got paid and didn't follow through.
But they did end up finding it, and I had my mini interview on the phone. The lady was really nice. She asked me about the language school I was going to attend, and about career goals, but it was mostly for her to check over everything to make sure it was complete. I'm still confused as to the purpose of Campus France.
I asked her if she had any advice to give me for the interview the next day and she said just make sure I had everything because I needed to provide them with a "story". She said above all don't mention any plans on trying to stay long term. She said make it seem like you're getting in and getting out. And she said "don't mention a boyfriend if you have one". Solid advice.
So my appointment was at 10:30 in the a.m., which meant I had to wake my ass up all early to drive to Houston. I would have flown, but two days before and the tickets are cray, cray. They need to move all of those international consulates to Austin because I can't with Houston.
One of the 50 million times I was flying to London I had a few hours to kill between my flights so I went out to get some nosh. I'm driving along and begin to notice I'm in Crackville, Texas. I pull off the highway and stop at the light when all of a sudden this car comes rolling to a stop. The tires were sparking because they were blown out and homeboy was driving on rims. The hood was smoking and smashed in. And this fool was passed out, slumped over the wheel. I'm still confused as to how the car stopped. Any way a hooker from a gas station across the intersection comes running up to the car, pushes the dude across to the passenger seat, gets in, and drove off with it on fire. This all happened before the light turned green. And that in a nutshell is H-Town. 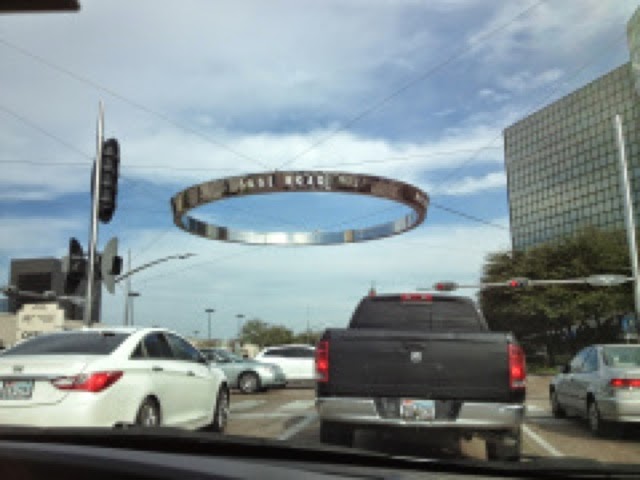 But don't worry the Consulate is in Uptown Park near the Galleria (read: money, honey. That pic above is of the froufrou suspended ring street signs). The consulate itself is not what one (or rather me) considers a "Consulate". It's in a high rise on the 6th floor of an office building. It looks just like any other business. You wouldn't know what it was if it weren't for the signs saying "visa appointments, this way". There wasn't security or anything, and they didn't take my cell phone away from me. There wasn't even a receptionist. Just signs everywhere. So I got in, shoved my visa appointment form under the window, like it said, and waited.
There's no privacy either. You walk over to the other side of the reception area and there are two chairs with a glass partition separating you from the visa officer. It's like when they show jail visits on tv, the officer talks to you completely through microphone. I though I'd get lucky and get the guy who was interviewing another person there because he seemed really nice and flirty when he asked me about my visa appointment.
The lady didn't really ask me anything. I was expecting an interrogation. All she asked me was why I was going and then to pay the fee. The website lies by the way, they do accept credit card (Visa, Discover, and MasterCard), and if you pay in cash (like it says) bring exact change. She got really pissed that she had to go and ask around if anyone had change. And it only cost me $69. I don't know why the price is much higher online. I thought it was going to be $135.
She tried to get my biometrics, which is different from the UK visa process, but then got angry when she couldn't get my fingerprints, and just snapped "nevermind". I don't know if I should take it as a bad sign that she didn't get my prints...  And the whole time she and the other man bickered at each other in French. It was really bizarre. She then told me it would be 10 days, and then sent me on my way. The whole process took about 10 minutes. It took me longer to park than it took for the visa interview.
The other guy next to me wasn't American (none of the people trying to get visas were), and it didn't seem like his interview took long either. He didn't have all of his paperwork (neither did I), and the CO just told him to email it to him (mine didn't say anything about it). He then asked if he could come back later in the day and pick up his passport, and they were like 'give us two or three days'? Now the Brits may have scarred me for life because this was nothing like their process. UK Border Agency is no joke. So I thought getting a visa was much harder than that. I mean she didn't ask where I would be living, how I was going to pay for my stay, nothing. Aren't these pertinent questions?
We'll see I guess. I'm not really looking forward to the next 10 days.
Labels: French Consulate Immigration Moving Abroad Moving to France Paris Visa