Too Legit To Quit

I guess if this post had a soundtrack it would be Nina Simone's "Feeling Good". Or Santi's "Disparate Youth". "They all said i was misled but now the odds all stand beneath me". I am legally a French resident starting June 15th. (Suck it American Embassy).
Yay. It should feel sweeter but maybe it hasn't sunk in yet? Or as usual it's all about the challenge and the thrill of the chase for me... I need to get some psychoanalyzation to fix that.
My appointment was Friday and they mailed my passport back on Tuesday. I guess they're quicker than they say. I hate my photo. I am not photogenic at all, but I'm throwing some serious attitude in my picture (that CO I swear). And not in a fierce way. It's "just take the fucking picture" face if I ever saw. I'm tempted to lose my passport just so they have to update all of the photos inside. Would that be too narcissistic?

I really thought I was going to get a denial stamp. When David Cameron came into office and started halting immigration that was the day the music died, and I figured with France getting progressively more Far Right with each election, they'd start limiting their numbers too. The Indian guy next to me had to give them his bank history, his airline tickets, and his lease and mine didn't ask for that so I figured things were not going in my favor. *Nerd Alert* I went online and researched the appeal process just to have all of my bases covered, and after reading about all of those visa denials, I was for sure that was going to happen. Quick tip if you are denied, the general consensus seems to be don't appeal becuase it's useless, just reapply.
I thought they needed way more information than they asked for. Their biggest worry is that you'll never leave and suck up their socialistic resources right? And with a handy new French social that's a worry non? But I guess being an American can be an asset sometimes, we don't do that government aid shit so no worries other governments. We're a nation of born and bred hustlers, unfortunately socialism will never be our thing. Screw the bald eagle, Scrooge McDuck should be our national symbol.
I didn't do all of this to punk out now, but I'm going to miss certain American aspects, like pop culture (France is behind by like 6 months), pomegranate errthang, bad bitches (truly a foreign concept), and Texas barbecue. Although I thought I'd come back home and be all excited to have my favorite American/Mexican food back... not so much.
Don't get me wrong I scarfed down brisket for a whole week like cow's were going extinct. Texas barbecue is the food of the god's, but it will be so nice to go back to healthy food (I was practically vegetarian over there). I've put on like 10lbs since being here. But It's not such a bad thing though, being in Paris made me way too skinny. Thankfully it's all gone back to my tits and ass (although I can do without Iggy Azalea thighs), which I missed having. 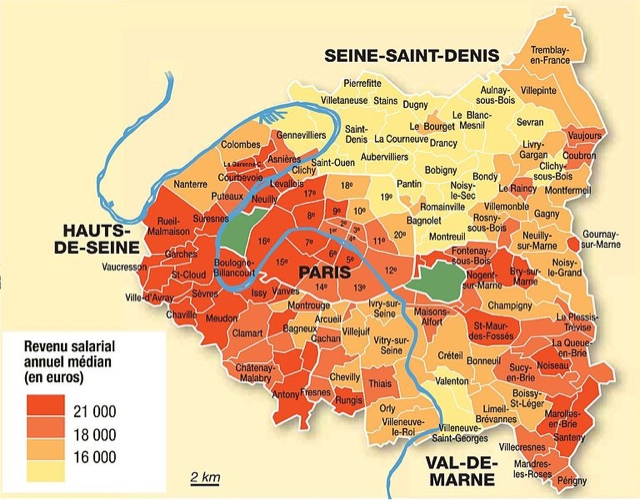 Now comes the fun part, and by fun I mean that sarcastically obvie, renting a flat. Urgh the Parisian rental market is a nightmare. And for some reason Marais (the 4th) is one of the hardest neighborhoods to find one in? One of the guys I'm talking to owns a flat there and reiterated the same gripe. He said it took him a long while too. I don't know why that is...
Guess what's the easiest and cheapest? Yes, Montmartre. UGH. Never. Not even for €650 a month. (For those unfamiliar with Paris, by no means adhere to my preferences. Montmartre is super cheap to rent in. You can get an actual one bedroom for the price of studios in other areas, and there are always a ton of rentals available, so look into it if you're not interested in spending a small fortune on rent. The pic above will help you figure out which boroughs are cheaper to live in).
Because Marais is like finding a needle in a haystack, I'm expanding my search criteria and looking in the 5th, 6th and 1st (yes, my estate agent hates me). The 1st is a bit... sterile, but when I was first moving to Paris I was going to rent a flat off Rivoli in the 1st so I know there are some there. I do wonder though why I can never find anything on Cite? The 1st side looks heavily residential but I never see rentals for the area? One of my creepers said he used to rent a flat there so surely it's not the 'island of home owners'.
My bottom line is to stay south of the 2nd or 3rd. Grands Boulevard/Poissionniere/Bonne Nouvelle are way too busy at night. Not to mention I hate those Haussmann streets in the 8th. I'm not really a fan of the area where Rivoli turns into Saint-Antoine (near the St. Paul metro), but one of the other guys I'm talking to swears by the area. That's where my old Franprix was and I mentioned in the other post everything is like €2 more there than in the 5th. Markup is not the one.
Another guy I'm talking to loves Republique, but... Just like I wax poetic about Marias, he's the same about his hood. He says Canal St. Martin has a great nightlife, it's lively unlike other areas, blah, blah, blah, but that's the problem with opinions from Parisians, they all have a reason for why their neighborhood is the greatest. In my opinion they're too far east. I don't want to go past Boulevard Bourdon.
And nothing south of the 5th, 6th or 7th. Like the 8th, I also consider the 7th too far west and too domesticated. There are a few nice streets, but it's full of twats wearing sweaters around their shoulders, like it's 1985 and they're going to bully Molly Ringwald for being a poor. Who knew Scott Disick was the look? This also excludes the 16th. I know it sounds like I'm being very limiting, and have a very rigid criteria, but you get used to certain neighborhoods, or want a certain aesthetic, and suddenly a little city like Paris gets even smaller. I'll keep my options open, but this is how I'm going into my search.
Besides my preference when it comes to my homes seems to be as close to the center of the city, and the river/water as possible (Trastevere facing Tiber Island, Port Vauban, Mayfair, Gramercy Park). Sure the inner circle is pricey, but the way I look at it, you can't put too high of a price on convenience. When I lived on St. Louis I had like 4 metro stations to chose from, as well as an RER, and a number of bus stops. When I lived near Jardin des Plantes it was 3. Plus I could walk everywhere. Yes, I was not a fan of the plethora of tourists that would clog up the bridges making my walk to Hotel de Ville go from 5 minutes to 25, but you learn to avoid certain places on the weekends. 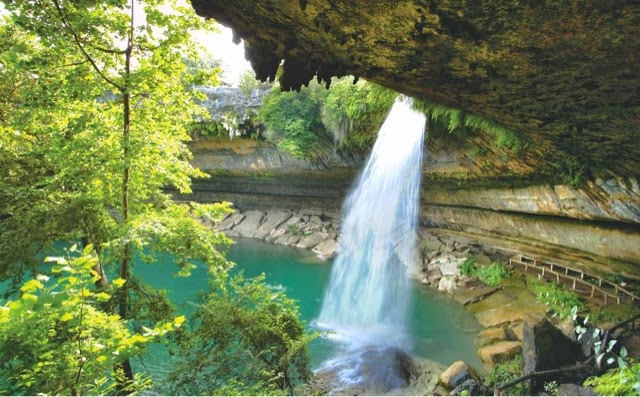 This time around I'm not going to stress about flat hunting. It's summer times in Texas and I forgot how outdoors-y I get this time of year. I'm from the city, but I always spent my summers on the water. It was the most idealic Southern childhood so something in me switches to "summer mode" (nostalgia), and I want to spend every day outside soaking it up (when it's not 100 degrees). So I'm going to enjoy my last few weeks in hell's waiting room, being as very Texan as possible; kayaking in Zilker, hiking in Government Canyon, floating the Guadalupe, and basking in the Texas Hill Country (the pic above is Hamilton Pool). Now that I know what the rental market is like in Paris, and what to expect (an unmodernized shoebox) I'm going to be less stressed about flat hunting. Come what may right?
Labels: French Consulate Immigration Mazel Moving Abroad Moving to France Paris Renting Visa