The Better to See You With 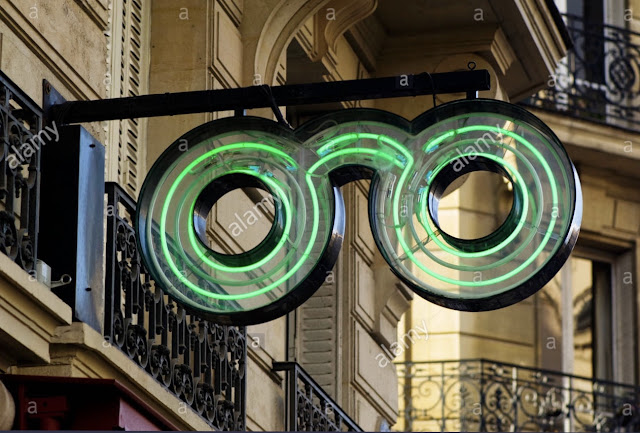 I had been needing to buy new glasses for a while. I had brought two pairs with me, but one pair I lost, and the second had gotten crushed at the pompier ball. Finally I decided to stop procrastinating and just do it.
First I needed to see an ophthalmologist to get a new prescription. I was told seeing an ophthalmologist was going to really hard because the appointment wait was over 3 months. Yes, 3 months. Talk about poor foresight.
Just a tip, If you’re looking for a doctor of any kind, I recommend Doctolib. I use their website to set up a rdv because it’s just so much easier dealing with a computer. Luckily I found a doctor on Breteuil who had availability asap. No waiting for 3 months. Relief.
I got to my appointment 15 minutes early because that’s what we do in the US right? No need. The room was packed and I ended up waiting a while. The assistant finally called me in and she was the nicest. We laughed, we joked, we checked my eyesight.
After that she told me I needed to wait to see the doctor. Another 15 minutes passed, and I was wondering why it was taking so long. Finally the actual doctor called me in. She looked into my eye with a light, printed out my prescription, and I was done. It was a little strange, because she barely said two words to me, but whatever. I was done.
I went to the reception desk to pay. Now this is the sucky part. Not only did I not sign up for a carte vitale, but the price for a simple eye exam is more expensive in France. I had seen pricing for 80-120€ so I was expecting it but ponying up 90€ for an eyeglass exam still hurt. I had sweet, sweet memories of $30 10 minute exams at the local Eyemasters. Sometimes American healthcare is the cheaper option. I’m betting a contacts exam is a lot, lot more expensive than $120.
The great thing about France is they love eyeglasses, there are shops every 50m. You’re going to find what you want. But I had already seen a pair that I had wanted in the window of a shop in the 6th so I dragged my ass all the way to Saint Placide to check them out.
When I got there the guy was really nice and spoke English. Unfortunately, even though it’s soldes right now, soldes does not apply to glasses, but I got lucky and for some reason they were having 40% off Gucci. Gucci just happened to be the brand that made the glasses I wanted. I ended up buying two pairs. He only gave me 20% off the lenses on the second pair for buying two pairs, but whatever, a discount is a discount.
The only gripe I have is about the wait time. I ordered them on Friday. When he and I had first spoken, he told me glasses only take 24 hours to make. Well here we are on Monday, and my glasses still aren’t ready. I contacted him on Saturday, because he told me he would know by then, but he told me he didn’t know the final day and would contact me. French customer service rears it’s ugly head.
I’m not saying all places are this bad. Other people have told me it only takes 24 hours. But this place is that bad, so maybe try another location when you decide to pick up yours.