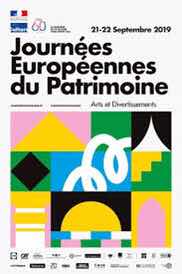 Another fun event that happens in Paris, annually, in the Fall, is European Heritage Day. On that day cultural sites open their doors for free. Many monuments you would never have access to otherwise are open for the weekend.
I had been hoping to see the Élysées, but no one mentioned that you needed to online RSVP beforehand. When I turned up, the guards wouldn’t let me near the area. I tried to look online, and still there was no mention of how you could get an RSVP. I think it was a short window that opened by special invitation. Total ripoff.
But I did get to visit the Sénat. Usually the museum at Luxembourg is the only area open but for Heritage Day all of Luxembourg Palace was on show. The line was about 45 minutes, but it went by quickly enough.
I had planned an entire weekend of like 30 different sites (seriously researched and all),  but in the end, because of the lines, the aforementioned RSVPs, the fears of Gilet Jeunes, and the walk, I ended up only seeing Concierge, Invalides, and the Sénat. I had wanted to see Hôtel de Ville (the most beautiful building in Paris), but time constraints didn’t make it possible.
Definitely make a plan beforehand, but stay away from that awful website. The French are so bad with technology. It’s amazing anything works at all. Plan for this event to happen annually in September.
Labels: Events