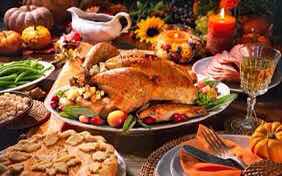 This is a tricky one for me to write about because as of yet I haven’t actually found that traditional “American Thanksgiving”. You would think it wouldn’t be hard. If 330 million Americans celebrate it every year surely you can too, but recreating that in Paris is tricky.
For one, the turkey. Dinde is not really a popular meat in France. It exists, but it’s not like in America where a turkey sandwich is the norm. Finding a whole turkey is definitely something you have to special order. Because it has to be special ordered expect it to be more expensive than the $20 you’re used to spending at your local grocery store back home. You can usually find a listing of butcher’s who will take this special request or you can ask your local boucher.
I’ve never tried to make a traditional Thanksgiving dinner. I do in America, but making Thanksgiving dinner requires like 500 different ingredients, and I’m sure 1/3 of those ingredients are not available in France. Pumpkins for instance are nothing like American pumpkins. Be prepared to spend a lot of time researching French equivalents, buying the ingredients online, or buying them at Thanksgiving (an American store in Paris) with a hefty markup. Oh and good luck with the oven. I’ve been in many a hotel particular and even those giant Parisian homes don’t have ovens big enough to accommodate all of the food you need to cook. I had a friend who had two ovens in her apartment, but she was American and she liked to cook.
Now that I’ve scared you away from cooking, let’s talk restaurants. Luckily in Paris the French restaurant industry has realized there is a market for a Thanksgiving menu. At best 4-6 restaurants in the city participate in the holiday. You can usually find the listing of these restaurants every year in Fusac. Usually it’s the American restaurants that will serve TD.
The most famous of these being Ralph’s. Which I have always wanted to attend but one year I tried to make a reservation in July or August (it’s a pretty popular place). Two months later I finally got an email back saying contact us in October. I contacted them in October and was told that reservations open the week of. I contacted them the week of and didn’t hear from them. Then the day before, or the day before the day before, I was told that reservations open 24 hours before. I got so tired of the game playing I gave up and made a reservation at Ellsworth. I’m sorry but who waits the day before to take reservations? All of the services fill up their reservations weeks before, so if you wait to see if you can get a table at Ralph’s, and are denied, you have nowhere else to go. It’s rude and inconsiderate.
As I mentioned one year I had service at Ellsworth. They didn’t do it this year, but their take was a very French play on it. While it was good, it wasn’t “Thanksgiving”. It didn’t evoke those great memories of all day cooking and family around a table. In fact most of the people in there (small, 10 tables max) were parties of two, and it was all very intimate and romantic. It’s probably great for Valentines Day.
This year I had service at Marlon, the California restaurant in the 7th. I’ve liked the place since they opened. I like the look, I like that I can get some American-esque dishes, and I liked that it used to be located 3 minutes walk from my house. But I wasn’t too enthused about their menu. It was another French play, on a California Baja play, on an American staple. For some reason, despite its proximity to the American Church, American Library, American University, and it being one of the most American neighborhoods, it was virtually empty. Which is unusual because it’s usually packed most nights.
All in all my experience with Thanksgiving in Paris has been kind of a let down. If you can afford the plane ticket, and can take time off, definitely make the trip back home every now and again. Even if most Americans end their holiday fighting with every member of their family by the end of the night, that’s Thanksgiving.
Labels: Events