The Differences Between Us 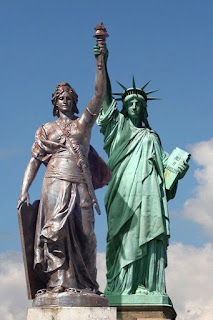 While sitting on Zoom meetings (ugh Covid new normal) I have a lot of mindless idle time and I began to think about all of the weird “office/school” related differences that surprised me when I got to France, and maybe even a few I miss since being in America. I thought I’d touch on a few.

In America we have two types of notebook paper: College and wide ruled. In France you have French ruled. It’s called “Grands Carreaux” or “Seyes” and it’s weird as fuck. Its like the paper you use in math class. It’s so messy writing on grid paper, and I never understood why they had it. If you want regular lined paper buy it before you come because you’ll be hard pressed to find it in France.

In America we exclusively use the 12 hour clock, unless you’re in the military. The rest of the world uses 24, which we call “military time”. In France I hated always trying to figure out “military time”. It was a headache for me and something I don’t miss. Be prepared to use it in your daily life.

I can’t even begin to tell you how much I hate Azerty keyboards. I worked for about a year for French corporations. I guess I kind of got lucky because they hired me to speak English. They usually had English speaking clients and wanted a native to speak for them. This could be clients anywhere all over the world. I once had a contract with a company who worked in Singapore so I would speak English to people in Singapore. Of course my work would be in English as well so I had to type on a computer or use a computer for work. Well the French don’t use Qwerty, they use Azerty keyboards, and using them is a pain in the ass. Sometimes the companies would give us Qwerty keyboards because it was so unproductive for us to work on Azerty, but I wanted to mention it because I didn’t even know Azerty was a thing. If you plan to buy a laptop or computer while in France be aware. Apple will let you special order a Mac with Qwerty keyboard, but for the most part it’s not their normal.

Fire at Will/ CDI

Not every state is “Fire at Will” but Texas is. This means your job can fire you at any time without notice. In France it’s the opposite. Your job has to keep you no matter what because it’s expensive to fire you. You’ll hear a lot of talk about CDI contracts and that’s because they are the holy grail. I speak more about the types of contracts in the “Applying in France” post

Children Can Eat at Home

Unlike the British system, the French school system resembles the American system a bit more, in the sense that they have something closer to Elementary (Primaire), Middle (College), and High School (Lycee). Beyond that the actual grade system never made sense to me. It starts with CP (1st grade) and then in order CE 1&2, and CM 1&2. Also children in France start going to school at age 3 (Maternelle). They can even go to crèche before that. I believe crèche starts at 6 months.

In America we are taught cursive in 2nd grade. Before that we use print, and even then cursive is only if you want to get fancy. There’s no need for it. In French schools children are taught only cursive. They begin at age 5, and that’s the writing they use throughout.

French children don’t use pencils. It’s weird to see because they are also using cursive, but every child has to use the blue ink pen with erasable ink. They even begin using fountain pens at a young age. One of my kids was filling her fountain pen at age 6 and I was like how are you writing with that already? Maybe I’m just too particular about making mistakes and having messy writing.

Every school child in France has to have an agenda. It’s a book where each of the school days are a page each, and they write their lessons and general school stuff in them. They take it home and their parents can see their work. You’ll see these small books in every child’s bag, and you will see them being sold in a variety of colors and patterns during rentrée. It’s the equivalent of every school kid in America having a binder, but this is just a place for kids to write down homework and such.

During my first month in France I had a date with this guy who worked for a Texas based company in Paris, but it being France they adhered to the French way of doing things. He would take a long lunch and have a glass or more of wine. He said they also kept bottles of wine in the staff kitchen. None of the companies I worked for had this, but it’s normal in France to have wine at lunch. Probably because unlike in the English speaking world, they don’t drink to get drunk. In fact whenever I would go out, French people were always looking at alcohol content. It was so weird, like they wanted as little alcohol as possible. They also have demi beers. I think of the French as a people who don’t like to lose control. Whereas Anglos drink to get pissed.

Job Pays for Metro and Food

Every job I had, even as a tutor, paid for half of my Navigo. That’s the norm in France. But some companies will also pay for your food in the form of Ticket Restaurant. They’re these little books of coupons that have amounts, usually like 10€ I believe. And you’ll see people using them to pay not just at restaurants, but also at the grocery store. I don’t think there’s a limit on when and how you can use them. A friend of mine was once given one by his boyfriend. Our job didn’t pay us enough to live and buy food so he would use it to buy his groceries.

Apparently it was Hollande who initiated the no school on Wednesday, or the half a day on Wednesday. French school kids will either go to school until noon on Wednesday, or they will have all of Wednesday off. Some kids go to school on Saturday. It’s dependent on the school. For instance Stanislas in Paris made their kids go on Saturday, but they had all of Wednesday off. Another kid went to French public school and she had Wednesday off but no Saturday. EJM used to have their kids just go until 12:20 on Wednesday. The American School of Paris only adhered to American rules so full days, 5 days a week. Schools in France are a nightmare for schedules. It’s no wonder most families hire aupairs and nannies.

Obviously this is a big one; the vacations. Everyone in France gets at least 5-7 weeks or more of paid vacations, which is why you’ll see people leave Paris for the entire month of August or July. But French school kids also get 2 weeks of school vacations every 6 weeks, in addition to two months off for the summer. The vacations always threw me because why do people need that much vacation? But then I got used to it and my body would literally start to breakdown on week 4 anticipating those two weeks.

There are a few more French oddities I was shocked by, but as of now this is what I remember as being bizarre to me. I thought I would miss vacations when I moved back to the US, but I work from home so it’s not really a big deal right now. If remote work becomes a thing of the past I might hate being back in an American job, but for right now I’m okay. Right now I’m in the privileged position to be able to save everything I earn. While I do that I get to stare off into space for hours at a time thinking of French and American differences.