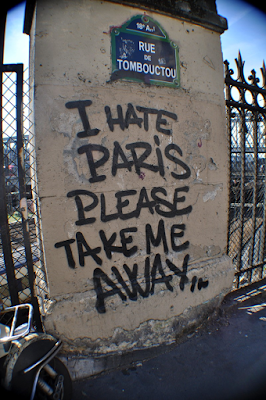 I wanted to share this post that I found by accident. I can't remember what I was looking up, but I saw it, and was happy I read it. Like the author my time in Paris sucked. Unlike her, I spent 6 years in Paris, not a few months, so I gave it the good old college try. It probably didn't help that no one ever tells you just how hard Paris is. I think she conveys a good message regarding the fact that everyone here drinks the Kool-aid and you're basically seen as a Pessimist Patty for voicing your griefs.

As I said when I wrote this blog I wanted to give everyone an honest account, and I'd like to think I gave it. Paris isn't glamorous by any means. It's a beautiful city, they try hard to clean it, and it certainly has it's positives.

That said the negatives can far outweigh them. It’s hard to remember how great the city is when you’re working all day, can’t afford food, much less restaurants, and live in a shoebox. I'm glad she was able to give a different perspective on it (the working side and job hunts). I also love that the comments are a safe space to vent. You won't find any room for that in the Expat forums. They’re usually filled with old British people who will yell at you to leave if you don’t like it (but moan about their pensions). Or worse the rich Americans who have 6 figure jobs with some American company, and don’t live in the real world (people in Paris barely make anything and it’s taxed, a lot).