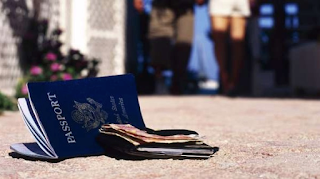 I don’t know why I never mentioned this considering how many times I’ve had to get the little white piece of paper from the police (I forget the name and I can’t find any of my copies). If you lost your passport, don’t freak out! It sounds scary, but it isn’t as bad as it seems.

If you happen to lose your passport make sure you head to the police station. The one in the 3rd on rue Aux Ours was my go to. They’re used to dealing with tourists so the process is super simple. The last time I went the officer didn’t even bother, she had me fill out the entire thing and just stamped it. The whole process took like 5 minutes.

Let them know your passport is gone and they will give you a little white sheet of paper smaller than an A4. It has your name on it, and your American address (that you write in). No need for a police report, they wouldn’t do it even if you asked. Once you have this, you take it, and the paper work that you need (check the Embassy site), to the Embassy.

I don’t know how other countries work, but for Americans, the process is pretty simple. You can show up at the Embassy, and let them know it’s an emergency. They will issue you a new one in 24 hours. The only downside is that it’s a temp. It can get you back home, but it can’t take you anywhere else. And you’re basically paying the same price that you would for a proper book.

However, if you’re staying in France, and have some time, you can forgo the emergency passport and have a full passport made within two weeks. I think it took them 7 days from appointment to mailbox when I got mine done.

I explained it in another post, but in case you’re too lazy to scroll, you basically show up at the Embassy whenever your appointment is. Don’t worry about being early because they won’t let you in. You have to stand across the street (on the park side) and wait until you are called to cross the street. When I went in February it was freezing and they had us waiting 20 minutes over the appointment time. Who knew the American Embassy had adapted the French concept of showing up 15 minutes late for everything?

Once you are called to cross the street, the guards check your appointment (I had mine on my phone, others printed it), and your belongings, and they point you to the guard entrance. In there your belongings and cell phone are taken from you, and you are told to proceed inside the Embassy to the welcome desk.

The welcome/reception area is where Embassy workers check to make sure your file is complete. From this area you can print your application, take your photos, and buy a prepaid envelope. After they ensure your paperwork is complete, you are told to go to what is basically one large government waiting area. And yes, it is just as hideous as every American government waiting area. It was like being at the DMV.

You wait in the waiting area until you are called to a window. At the window they again look over your paperwork, and they instruct you to go to another window, the payment window. This line is so long, I waited like 25 minutes while a bunch of Woody Allen Americans let their little Bebe’s kids run around the place. All under the watchful eyes of Trump and his shit eating grin. It was like a preview of what was to come, and it made me not want to go back to America.

After the payment line, you wait until you are called back to the window. The person will take the proof of payment. and I guess you’re free to go. To be honest the lady who took mine spoke broken English and was a low talker. I got so annoyed with her I just left. Make sure you keep your copy of the payment receipt less anything should go wrong.