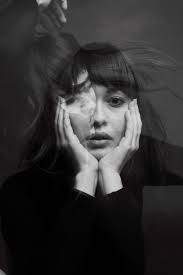 I also want to share this piece by Mandy Cherie. I felt a lot of her frustrations, except the big difference between my thinking and her’s is I never wanted to “fit in”, I never had an inferiority complex, and it never bothered me to not be French. I could pass for it, at least before I opened my mouth, and on the street no one talks to you.

If anything I had a superiority complex. French people loved that I was American (they hate the British tho), so they always treated me really well. They loved talking about movies and series, and asking about Brooklyn. I don’t know why, probably because Americans spend a lot of money, and we export so much of our culture. Completely the opposite of England. To be fair to the French the Brits are dicks and should be universally hated the world over. I suppose Brexit will take care of that. You really can’t blame the French. But being lumped into the "Anglais" was never a problem for me, because I had the right Anglais accent.

I never cared about fitting in. I was different and I never wanted to change that. That's also an Americanism. In America you want to be different, in France they all want to be the same. If anything I kind of looked down on the French for their weird, and complicated ways. In a strange way they almost respected it. The Parisians are masters at “I don’t give a fuck” attitude, and that’s something you need to lean into. I am grateful to the French for teaching me that, and I certainly use that teaching everyday. Oddly enough most people respond to it positively.

That being said, the identity crisis is awful. You’re not French, and you’re no longer fully American. You’re this weird mutant that doesn’t fit in anywhere. If anyone has ever read Edward Said, he talks a lot about his loss of identity. Granted he is Palestinian so he did not choose to lose it, but it’s something everyone should read if you ever feel lost and out of place. Even Baldwin's "Stranger in the Village" is recommended reading.

It also didn’t help that my only anchor to the life I had known for the past 6 years, Christian, left me. Going through all of this, and my breakup with Christian Kinnersley, has put me into a terribly dark place. It's been a few months now, and I am not any better. Luckily I can cope with loneliness because I'm used to it, even if it really, really sucks, but for others, who aren’t, I imagine they have a harder time.

As for the men, I am probably too ‘feisty’ for my own good. And being in Paris made me even more so. I can stand up for myself. But Frenchmen are a new kind of domineering. Two of my boyfriends physically assaulted me. Domestic violence is rampant in France. Men make no qualms about hitting you. Hitting women doesn't carry the same kind of stigma that it does in America. 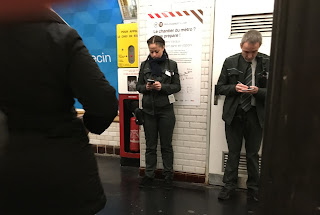 One time I was with a friend form America who came to visit me. I didn’t have a ticket for the metro, so I hopped the barrier at Bir Hakiem. RATP Controls were there and I was immediately caught. I refused to pay (being poor and all), and I asked for a fine. The Gendarmes were there for whatever reason, and RATP handed me off to them. I had only been in Paris for 10 months so like any tourist I immediately invoked the “I want to speak to my Embassy” rule. There were like 6 Gendarmes, all men, who formed a circle around me and started yelling at me, grabbing my purse trying to open it, pushing me around, and trying to scare me. When I wouldn’t say what they wanted to hear they looked like they wanted to hit me. In that kind of situation I don’t get scared, I get pissed off. They yelled obscenities at me. Then they handcuffed me and took me into an RATP booth. They called me “whore”, and “bitch”, and kept me in there for a good 10 minutes while they berated me (in French). I called them a few names too. Finally they let me go.

Another time RATP Control came on the bus. I didn’t have my ticket (I always dropped it into the little plastic container at the front of the bus). Again they wanted my credit card. I told them I had an Amex (which they can’t take). They told me "you're American, you're rich" and I politely explained to them I live and work in France, I'm poor. They got mad. They took me to Montparnasse terminus (the south end near the residences). They stood me on the sidewalk for about 20 minutes, and again did their intimidation tactic. They told me I would be arrested at the airport. They told me the police were going to come. I did not budge. I had been here before.

Call me names, call me a bitch, say whatever you want to me, take a swing at me, you will not break me. I have far too much fight in me. Call me incautious but nothing intimidates me. Least of all if I feel I’m in a combative situation. That’s where I become even more fearless. Perhaps even foolishly so. Or as Austen would say “ There is a stubbornness about me that never can bear to be frightened at the will of others. My courage always rises at every attempt to intimidate me”.

Anyhow men are bad in Paris. Not white Frenchmen, they're too shy to approach women directly, mostly North African French. They try to touch you on the street, they follow you home, they masturbate in front of you on the RER. Most of the time I told them to fuck off. Once I punched a guy in the dick on ligne 4 who was trying to touch me. Ignoring them can work too. The worse is when they keep following you. Or worse they follow you and speak at you the whole time (in French, so you and everyone else can understand the filth they're saying). Even though you are ignoring them, they persist. That’s happened a few times. But that’s just life in Paris.

No one really talks about this stuff. It’s all “Paris is great, it’s the best, I’m so lucky”. There should be a support group for Expats. I don't think anyone can really understand what it's like to feel like an alien, much less an alien in your own home. Words can't even describe it.

That said I do miss Paris in a lot of ways. Because I no longer feel like I belong in America, I tend to think all of the bad in Paris is a better feeling than what I feel now. At least in Paris I had my boyfriend, and cheap rent. Now I'm more alone than ever.