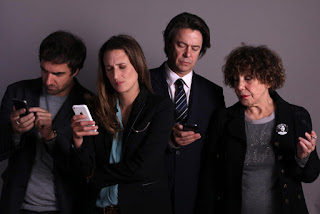 I’ve been watching “Call My Agent” (Dix Pour Cent). I had been recommended it years ago, but never got around to watching it. Now that I’ve been trying to hear French in any way I can, even as background noise, I decided to give it a go.

It’s funnier than most French programming I’ve watched. I love when Camille’s mother says “all of the girls in Paris eat birdseed and scowl”. True. Everyone says it’s so much different outside of Paris, that it’s better, but the few times I traveled outside Paris I didn’t like it. I found people to be ruder. Weird huh? But I sometimes wonder how my perception of the French would have changed had I done those 6 months in Antibes years ago.

I’m barely on episode 4 so I can’t speak to how good the show is yet, but I like that so far the actresses have all been older. I don’t know if that’s going to be a running theme with the show, but it’s been a huge juxtaposition between French and American culture for me lately. There’s a cliche that the French respect age. One thing that stands out is that in Paris it’s perfectly normal to get married and have children later in life, but in America you’re supposed to do that in your 20’s.

Dating Christian Kinnersley really made me question my mortality. When he first broke up with me he used the excuse that I was too old to have his children, and too old for him to marry. He never grew tired of reminding me of that. I’m not old, but he wanted a 22 year old to have his spawn, and he would often throw it in my face that it was why he couldn’t love me. When someone you love more than anything in the world, says such cruel things, it affects you. That really stole my confidence. Being back in America, where everyone has settled down in their 20’s, it’s made me feel even more foreign.

I remember when Caroline Flack died on Valentine’s Day. That really hit close to home. You know how some deaths hit you harder than others? I understood completely how she felt then, and even more so now. When he and I broke up for good, that loss made me suicidal. A lot of things hit you at once, and it feels like your life is over. Constantly being told by him that I was too old didn’t help. My life feels like it’s over, and everyday is a protracted struggle. This year really has been the worst. I’m not being charged with battery, but Christian is taking me to civil court so there’s now that parallel too. He truly is barbarous. It wasn’t enough to completely destroy me, he wants to make sure there’s nothing left of me. Having to deal with all of this, and now a legal battle… I guess it’s a good thing my company offers legal insurance. He’s like Johnny Depp going from court to court trying to find something that sticks. I’ve never felt more like Michael Douglas in War of the Roses.

That was my long winded explanation for why I miss French culture in a lot of different ways, and why I love this show so much. The actresses are all older, accomplished, and never treated like their lives or careers are over. They’re respected. If it had been an American show all of the actresses would be under 30.

I’m also drawn to the heavily Paris setting. I’ve been seeking Paris more lately; I want to go back to a simpler time I suppose. Paris was the last time I felt secure, and not like my life was crumbling down around me (I had some pretty tough times, but nothing like this or maybe I overcame them more easily because in Paris you have to keep swimming). Most of the series is filmed in the 1é, and the street scenes are almost exclusively filmed around the Louvre and on Rivoli, so I wouldn’t recommend it as a good idea of what Paris looks like. The 1é and Rivoli are unique for a reason. But it’s grey, cold, and rainy, throughout, and that’s a more realistic example of what Paris is like most of the year. I’m pretty sure it rains more in Paris than in London.

It’s a bit weird that an agent, who represents such high profile clients, lives in a studio “with his brother” in what looks like a modern high rise in the 19é (or possibly the 13é). I know tax is high in France, but you would think he could afford something nicer? I guess maybe that’s the inside joke, the French are good at keeping things realistic. After Gabriel goes to the Porte de Lilas show they passed by my old Monoprix on rue de Belleville that I frequented almost daily when I lived on Cascades. Good memories.

I would put it in your Netflix queue if you’re looking for something like Emily in Paris. But I would go so far as to say it’s better. It’s not as glossy, and the subject matter isn’t as shallow. Darren Star is the showrunner for Emily, and he was also the showrunner for Sex and the City, which explains it. If they ever want to do a Sex and the City series for Paris, hit me up. I’ve dated so many men, you could write an episode for each guy and still come away with more than 10 seasons.

Dix also reminds me of Extras because they feature famous French actors playing themselves, although I have not heard of them. But I liked Cecile de France. She seemed to have fun with the role. And Zinedine Soualem who keeps insisting he can play Algerian or Portuguese or Spanish just to get a part is pretty funny. I loved Audrey Fleurot, she was my favorite so far. She’s gorgeous and hilarious. I want to seek out her work to see if she’s as funny in other parts. All of the actresses featured seem to have fun with it, and that makes the show even more endearing. The French are not known for self deprecation, but this show is an example that they can make fun at themselves. I highly recommend it.

Update - I’m on series 3. I can’t stop watching this show. I love it. I almost wish it would get nominated for an Emmy so it could get even more recognition (that it deserves). I hope it gets renewed for a 5th series. It’s such a fantastic show. And it’s helping my French. I’m shocked by how easily I can follow it, and how it’s helping me retain it. I guess I’m losing it after all.

It’s such a funny show, but it has heart. You can’t help but love all of the characters. When Herve tells Camille “I never go to the double digit arrondissements”, I laughed because I always used to say that. I can’t sing this show’s praises enough. It’s one of the best things I’ve seen in a long time.

When Sophia leaves Gabriel, and Arlette and Hervé track Gabriel down at Jardin de Plantes watching the orangutans, and Arlette later tells him “you’re drowning in heartache?”, and he responds “I feel useful there. I keep them company because they are even more sad than I am”, I felt that on a deep level. It has it’s amusing moments (Andreá and Gabriel shooting the fake Isabelle Huppert had me dying), but it’s also touching. When Mathias leaves Naomi and she breaks down, and Herve gives up Cannes to stay with her? Naomi is so sweet and gullible. I love her and Herve’s scenes together. All of the actors are fantastic. I’ve identified with most of the character’s situations (Mathias when his wife leaves, Andreá when she screws up with Colette, Herve and his crap actor boyfriend, Gabriel and his depression when Sophia breaks up with him, Sophia and her feeling of failure at going back to ‘zero’), you can empathize and identify with them, and that to me is a sign of good writing. You feel a bond with these characters. You want to know what happens to them. You care about what happens to them. You want them to succeed. Even Mathias and Hicham. Poor Hicham. He really grew on me.

And bonus it has Juliette Binoche and Monica Bellucci who are my idols. I loved Beatrice’s storyline too. I don’t know her work, but I think all women can identify with her speech about how it took her 30 years to learn to say ‘no’ to men. The actors playing themselves really have a good time with it. I laugh, I cry... j’adore cette série. vraiment aimer.