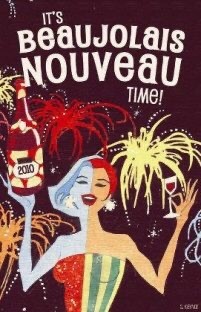 A quick tip. I know, my last post proved I am no expert and really shouldn’t be writing on the subject of wine, but this is more about an event, than wine itself. Actually it’s not even a huge event in the Parisian social calendar, it was something I experienced one night in a locals only Breton bar near my apartment behind Saint Vincent de Paul (9é). I just happened to remember it, and realized I never wrote about it on the blog. One day I will get around to writing about all of the stuff I left out in those years in Paris when I took a break from writing.

My first year in Paris I was invited to celebrate Beaujolais Nouveau Day. This annual event is celebrated on the third Thursday of November every year. The wine itself isn’t allowed to be served until 12:01am (French law). At that time bottles are opened and everyone drinks until dawn. It’s actually a fun little reason to go out on a Thursday night. Don’t worry, Thursday nights are French Fridays so you won’t look like a lush for partying it up on a “work” night.

The event itself is a much bigger event in Beaujolais obviously. I would suggest checking those out as Paris in November is pretty dead anyhow, and it’s a good excuse to get out of the city. In fact Paris during the winter really is a dreary, depressing place (at least in America there is a holiday every month so autumn and winter are actually really fun party seasons).

Beaujolais itself isn’t the best wine. Outside of that day I’ve never had it again. The French I’ve met will tell you it’s an inferior wine that no one actually buys, much less admits to drinking. The irony is they’ve packaged it differently to the rest of the world, which having lived with the French, and knowing them well enough, I’m sure is their own private little in-joke. But it’s something to do during boring winter months when there is little else to do so I suggest the experience.

And if you don’t want to travel to Beaujolais, you can always do some research and try to find a bar in Paris that is hosting an event. I may not have traveled to Beaujolais but my experience was sufficient. I had a great time, even if it was in a tiny little Breton bar tucked behind Saint Vincent de Paul in the middle of Paris.