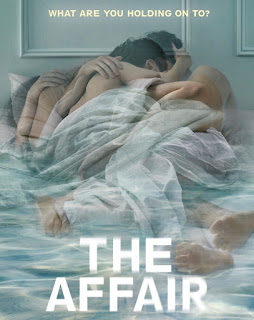 I don’t have as much free time to watch tv as I’d like. Work gets in the way, but things have been slow because of the holiday season. With the pandemic, there isn’t much to watch anyhow. We pretty much ran out of things when they had us in lockdown in the spring, and they haven’t been pumping out new content like they used to. It makes the pickings slim.

Recently Dominic West and Lily James were in the headlines. I didn’t care one way or the other for them; Lily James isn’t a great actress or an endearing one, and Dominic West has always come off as sleazy, but it reminded me that I had never gotten around to watching “The Affair”. Being in Paris I had missed a lot of series, especially series on the premium networks, so I added Showtime to Prime and decided to give it a go.

I watched all of it in a pretty short amount of time. I like having background noise when I’m working, and I put it on and didn’t stop. Doing so causes you to digest a lot of information in a small amount of time. While it wasn’t the greatest tv ever made, I believe the running theme was trauma, and the negative impact one action can have on a number of people. It made me analyze a few things in my life.

The show, while not being very good overall, was great at showing how one thing is perceived from all sides. Noah Salloway was a pretty terrible person, Allison Lockhart-Solloway-whatever-her last-name-became was pretty terrible too, but when you watch the show from their points of view, and then see it from Cole and Helen’s, it really makes you question things.

There were moments where I began to think of my own present trauma, and I began to wonder if I was being too harsh to Christian Kinnersley. After all I can’t see it from someone else’s side. I can put myself in someone else’s shoes, and I try to do that often, but I can’t take away my own bias, no matter how many years of diplomacy and conflict resolution were drilled into me. No matter how much I try to put myself in another person’s shoes, I can’t see them, or their reality, the way they see it themselves. It can also be hard when manipulative people prey on this sensitivity.

I really recommend the show, not for it’s stellar plotlines (it really jumps the shark after season 2), but because it will make you more aware of human interaction, and how you, and others, perceive your actions, and their own.

As for trauma, I’ve always been an easy going person. I don’t hold on to to things. Either because I have a really shit memory, or because I’ve been able to compartmentalize my life very easily. I also very rarely care about anything. I know that makes me sound selfish, I am in a lot of ways.

However in my relationship with Christian, I finally found a moment where I no longer thought of myself. He was my God. I only thought of him, and his wants, and his needs, and how to make him happy, and how to spend my life with him. When we were together I couldn’t sleep because I was afraid to miss one second with him. Everything revolved around him. Before him, that had never happened.

I look at my life like chapters in a book. Most of the chapters I no longer remember, or I don’t care enough to hold onto them to keep them in my memory. I really don’t know how to explain it, I’m just really good at forgetting. Or viewing my life as something that happened in another life, or to another person.

However I’ve been in a really bad place since my relationship ended. I am finding that this is the first time that I can’t move on. Perhaps I answered why that is in the former paragraph; because I’ve never cared about someone in this way before. Usually when something bad happens I isolate, and binge watch something, live in a character’s life for a few days, and then come out of it, never to think of it again. It’s like magic. It was a gift that allowed me to easily brush things off.

But for the first time in my life no amount of coping mechanisms are helping. It has now been 8 months and I am no better now than I was 8 months ago. This is not normal for me.

Take Paris for instance. My life in Paris was by no means easy. It was hard. Really hard. I want to make that abundantly clear because a lot of people lie. They pretend to be “Emily in Paris” and live their life for the ‘gram. They write about their life there like Paris is a magical fairytale where life is perfect. And true Paris is easy when you’re a tourist, and you only need a hotel for a few days, and you’ve socked away a savings which gives you money to burn. But ask anyone who lives there, it’s fucking hard. Most French people hate Paris. When you live there it’s not a fairytale.

I have never felt stress like that before in my life. I was poor, I was homeless, I had no family around, I had to make it on my own, in a city where I hardly spoke the language, and didn’t have any resources. I learned how to live on 20€ or less a week. Throughout the way I found some lucky breaks, or something miraculously fell into place, but it was so fucking hard.

What is it Fagan said in "The Crown", I’m not mentally ill, “I’m just poor”. Stress makes you so very unhappy, and exacerbates depression. During Christian and I’s relationship I was always so stressed out I never got to enjoy our time together. And of course no one else can understand what the stress is doing to you, or how miserable it makes you. You just come off like a miserable, moody bitch.

However when I look back on Paris I don’t remember all of those hard moments. Or maybe I do, but only for a second, and then it passes. Either way it’s not often. Sometimes I’ll be doing something, going about life, and a memory I had completely forgotten will hit me, and I’ll think “oh yeah that happened”. Sometimes I’ll even write about it even though it happened years ago because I honestly hadn’t thought of it until that day.

The only thing I really liked about “The Affair” was the way it showed how one act can destroy so many lives. I’m not a religious person, but I am a virtuous person, though flawed like any human. I’m someone who evaluates cause and effect when I make a decision because I do care about how my actions affect others. It’s weird, but I really try to think before I act, in goodwill, and then make a decision based on the perceived outcomes. Like Doctor Strange looking at all of the parallel universes. But it’s not easy to calculate. I’m not Nostradamus, and I do make the wrong decisions. “The Affair” made that anxiety even worse.

The act of their ‘affair’ was like Covid, spreading to all of these people and in turn making their lives miserable. It was probably a bad thng for me to watch in my current psychological state, and in the current context of my life, because it really took away any optimism I could try to piece together about moving on and having a better life than the one I think I’ve lost. Because that’s also apart of the grief; losing someone and losing the life you had with them, and would have with them.

Especially now during this pandemic, that is ruining all of our lives, and making it impossible to see the light at the end of the tunnel. I haven’t really thought of it because it hasn’t affected me, but I would be dishonest if I said it isn’t creeping it’s way in, even if I don’t realize it. As if my loss and the ensuing grief wasn’t bad enough, it has to occur during a global pandemic where I can’t run away and forget about it.

When I write about Paris it sounds much easier than it was. I really can’t stress that enough. I think people read my stories and they don’t quite understand that things were hard. They are extremely hard when you move to a new country with nothing. Trauma happened to me while I was there. Some of it I didn’t write about because I took a break from the blog for many years. Some of it I removed out of respect for the other person. In the case of Léo, he and I worked through it so I didn’t see the need for it to be there anymore. Although in some ways I regret it because it feels like I covered up some of my history, but I can’t really remember it anymore so I can’t go back. As I mentioned I have the amazing ability to move on from traumatic things. My brain easily forgets them.

Except for this time. Except for this. If you wonder why I can’t shut up about it, it’s because it’s eating me alive. This is one moment where I can’t move on. For the first time in my life I am slowly being destroyed by something I cannot run away from, something I can’t forget. No words can describe the mental anguish I am in every second of every day. I am being tortured by my own mind.

In a way I really felt for Allison, “the loneliest girl in the world”. She wasn’t a great character at first, but in her last season they made it seem like she lived her whole life in pain. She was dealt shitty hands, and the end of her story, while a complete let down, was probably more realistic than if she had lived happily ever after.

Life isn’t happily ever after. As human beings our only purpose in life is to seek and find happiness, and most of us fail. You don’t get what you want. We’re all just here trying to find, and hold onto, those micro seconds of happiness, in an otherwise too long and cruel life.