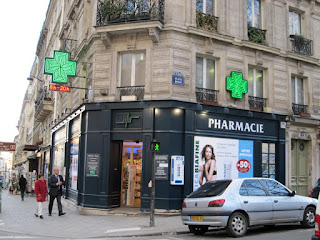 Pharmacies in America are not like pharmacies in France. In America we have CVS or Walgreens. I would never go to one expecting advice. The person behind the register is usually 16, and the only time you need to talk to a pharmacist is when you’re picking up a prescription. Even then they’re usually over it and barely help in that department anyhow. I don’t even buy stuff there, I buy it at the grocery store because it’s cheaper. To say I never use them is true.

However pharmacies in France are different. First off they can’t sell pharmacy products in a grocery store (law). The closest you’ll get is a pharmacy in a Monoprix, and not all Monoprixs have in house pharmacies. Parapharmacies are closer to what you consider "pharmacies" in the US.

From what I understood pharmacists are basically like doctors. They can’t write you prescriptions, but you can walk into one and they can help you much like a doctor can. Supposedly they train like doctors do. In some parts of the country, where hospitals are rare, residents see their pharmacist like they do a GP.

The reason I say “from what I understand” is because I’ve dated a pharmacist in 2018, and I would never ask him for advice. Now I’m sure not all of them are the same, but he was a trust fund kid who had no interest in helping people. He would show up to work hungover and offer people at the Palais Royal pharmacy crap advice (he would text me about all of the people who came in). He didn’t go into pharmacology to help people, he went into it to work for drug companies because he said they paid a lot. Oddly enough I dated a nice biochemist at GSK and they don’t make that much. Probably not what they’d make in North America, which explains why Pierre tried to go to Canada.

Anyhow I wouldn’t have wanted him as a poster child for French pharmacists. He was a weird guy. Although I hold no grudge against him. I’ve dated a lot of guys and I’m cool with all of them, so I’m not trying to bad mouth him. He texts me every now and again, so we’re still friendly. But I wouldn’t want him to be indicative of French pharmacists, and as such I never used pharmacists the way they are supposed to be used.

I give this advice so you can be smarter than me. The French say pharmacists in France are as well respected as doctors, and if you are ever in need of medical attention, especially a tourist, don’t be afraid to go to them. Besides you can't walk 50ft in Paris and not find one. They can help diagnose you and recommend medications. It is also much easier to pop into a pharmacy than it is to make a doctor’s appointment.

But if ever you are in need of a doctor, be sure to use Doctolib. I used it for my GP, and to find an eye doctor when I wanted to buy new glasses. It’s very easy to make an appointment and you can usually see the fees upfront (as a tourist you won’t have a carte vitale and will have to pay full price). You can look up doctors by specialty, zip code, and language. It’s so much easier than trying to Google someone.