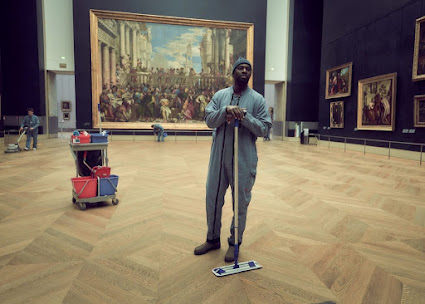 I know it seems that I’m making it my mission to bring awareness to French pop culture (although this one is getting so much buzz I don’t really need to). I had a friend named Soumia who had this idea to start a French cultural exchange program in the US. She applied for government grants and everything. I’d like to think she’d be proud of my efforts.

To be fair I don’t know how they hadn’t done a heist film before this. There are so many robberies in Paris perhaps it’s not that interesting when you live through it. I remember once there was a jewelry store robbery and they fled on scooters. They chased them to the 15th where there was a standoff. The news covered it for the better part of an evening and no one in the area could leave their houses. This is pretty much the norm in Paris.

After all of the children I’ve worked with I must admit I’ve never heard of Lupin. I don’t remember any children having the books. It’s weird because I’ve worked with hundreds of children and I can’t believe I never even saw the name.

Anyhow I don’t know the books unfortunately, but I was excited for the series (I’m sure they’re getting started on translating the books into English to coincide with the popularity). It wasn’t as Hollywood as the critics made it seem, and there were a lot of plot holes not explained away as well as Moffat and Gatiss’s Sherlock, but it was enjoyable none the less. I always like to watch anything set in Paris, and I enjoy a good mystery.

Fun fact, in my entire Paris life I never visited the Louvre. I kept telling myself I would do it one day but never got around to it. I had even wanted to do the treasure hunt, but never had anyone who was interested in doing it. On my last weekend in Paris I finally take the time (because it was cold, and rainy, and what else can you do when the weather sucks), and the bloody thing closes because the workers went on strike because they were afraid of Covid. I stood in line for over an hour while the workers pulled a ‘will they or won’t they’ open. My life really is a joke and the jokes write themselves.

The arch (actually gates) that she walks past, there are 2 of them on Boulevard Saint Denis. Léo and I ended our relationship under one. Good times. Paris is already tiny (which is my favorite thing about the city), it’s hard to imagine it was ever that much smaller.

The horse fountain is in Jardin Marco Polo which is the thin strip of park at the bottom of Luxembourg. I used to live across from it for 3 years. It’s a thing of beauty when the sun shines. The street is avenue de l’Observatoire in the 6th (if you cross the street you’re in the 5th. One year there was a garbage strike and the 6th being the wealthier of the two had garbage pick up everyday. The 5th wasn’t so lucky so for weeks the trash piled on one side of the street).

I dated a guy who grew up in the 6th. His father was some known politician. I remember he told me when he grew up there the area wasn’t considered rich, or even very nice. However if you own a hotel particular that’s a different story.

Of course they name the kid from the projects Kevin. I never understood this, but I had a friend named Kevin. It wasn’t his first name, his father was Senegalese and his first name was Senegalese so he went by his middle name even though he was the one who told me about the Kevin hate. I guess in France it’s better to be named Kevin than to have a Senegalese name. There’s some kind of prejudice in France against the name Kevin. Apparently it’s a name only used by the lower classes. It’s one of those weird culture things like English people hating gingers. It doesn’t make any sense. I guess in America it’s akin to Brandy or Candy or Tiffany (bonus if it’s spelled with an I).

“Deli Eat” is not a Paris food company. I guess it was made up because they didn’t want to pay one of the companies for the right to use their name.

Setting up a meeting in Luxembourg is pretty clever. I’ve spent so much time in that park, I know it like the back of my hand, and there are so many paths and entrances you could get someone lost and flee without being caught.

Why would a prison van go through île Saint Louis???? When I lived near Luxembourg, police vans always went through Observetoire by way of Saint Michel. I always thought it was weird, the sheer number of these on a daily basis, especially as there aren’t any prisons in Paris. But I assumed they were coming from the courthouse on Île de Cite. In any case you wouldn’t drive on Quai de Bourdon to get to a funeral home or mortuary. All of the funeral homes are in the 15th, which I always thought was for convenience considering the amount of old people there.

I taught a lot of rich French children who went to posh French schools and none of them ever had to wear uniforms. I forget the French reason for it. I guess they wanted them to look English to denote the school is a fancy boarding school?

Rue Vielle du Temps is in the Marais and unfortunately it is now infested with Bobos. When I lived there (2014-2015) the Gucci/Givenchy/Valentino hadn’t been built yet. Now it’s an overpriced hell that you can’t drive through (good luck with a taxi). But there’s already a number of roof top terraces there, most notably on the Pompidou and BVH. I’ve been to both and BHV is the superior of the two.

The parc they read in is Parc Monceau.  Very popular with children and also quite small. It’s not my favorite park in Paris.

I never understood the French custom of dipping tartine in your drink. I used to teach English to a little girl and she would eat baguette dipped in milk for breakfast.

It looks like Assane lives next to Square Anvers, but that building is actually a school. It’s a very pretty street in the 9th with a perfect view of the Sacré Cœur. You’ll usually see notices for “tournage”. And yes it’s weird how easily I can recognize parts of Paris based on very little. It comes from having to live in, and work in, every district.

It looks like they filmed most of the series in the 9th. He chases him through the side street of Saint Vincent de Paul to Lafayette. Then they enter a parking garage on… I want to say Chabrol? I can’t remember exactly, it’s the street that runs parallel to Lafayette. I’ve been to that parking garage because a woman I worked for back in 2014 used to park her car in there (she said it was the cheapest parking in the area), and we had to pick it up from there when she took me to the Une Piece un Plus in the 13th where I put my stuff in storage when I went back to America to get my visa. I can’t remember why but we went through almost every floor of it looking for the attendant who had decided to take a break.

The old lady’s apartment is obviously on Rivoli. That’s too easy.

The station shown from above is Gare St. Lazare. Which is exactly where you would leave from to get to Normandy. I’ve walked past that station so many times. I had an apartment on Laborde near Miromesnil and all of the takeaway places are near Saint Lazare. I hated walking all the way over there just to buy food and it would usually get cold by the time I got back home. Looking back on it, it actually wasn’t a far walk. But in Paris you’re used to having everything close by.

The bridge they walk on when discussing the name is near Bastille. You can see the column in the background. And you can usually see the boat’s when waiting on the ligne 1 platform in Bastille station. It’s kind of annoying how out of focus they put things. It makes it harder to tell where they’re at.

While I enjoyed watching the French take on Sherlock, I hope the show has more substance in the next series. Either the episodes are too short, or they don’t pack enough in, but it felt like eating popcorn, all fluff and no getting full. For a 5 episode series it felt like I watched an hour and a half movie. Usually when you watch 5 hours of tv you come away feeling like you’ve had more.

I’m happy to see what Netflix does now that they’re investing in French film (they opened an office in Paris), but I hope they use some Hollywood writer’s to help teach a few things. Dix Pour Cent was superb but so far it’s been a one off. I know it’s a bit snobbish, but Hollywood has been making films for over a hundred years so they’ve had practice at making good ones. Why not use them to learn how to make better product?

I like that the production value of this was good, and the look was quality. There’s always a weird look to foreign products, and this goes for British series as well (especially back in the day). I don’t know if they have lower grade cameras or what but sometimes it looks like bad cable quality. You know? Like something they would show on USA or Lifetime. So far the things on Netflix have been shot well. Even Marseille was good quality. If the French start producing some HBO quality shows they’d be big. They should learn from the British who eventually stepped up their game and now have some great partnerships (like Game of Thrones).

And if anyone is interested in more French mysteries to hold you over until “Lupin” comes back in a few months, check out “Mystery in Paris”. There are 7 episodes but they’re like movies. I highly recommend it. In fact I think I’ll make a post on the series. Perhaps if it got more recognition they’d bring it back for more seasons or Netflix could revive it.