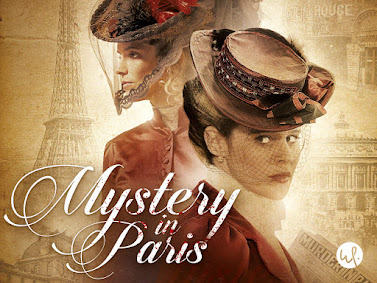 I mentioned this series in a previous post but I thought I’d give it a proper post all it’s own. I’m glad Netflix is investing in French productions because there are certainly not enough out there. The ones that are out there aren’t very good to be honest. Part of it might have to do with the fact that the French have different ideas about plot devices. Take “the Chalet” for instance, strong start, went in a strange direction, and then super weird ending. Another might be that the film industry isn’t quite as good as their Anglo counterparts. Hollywood has the money to spend billions on stories and productions, so it's like going against a giant.

Mystery in Paris is a bit French in a sense, but if you can take it with a grain of salt you can enjoy a few of the episodes. You just have to go in to it knowing the French have a different idea of what constitutes a good story. I will say though that the first episode is not strong. The second episode was better, if not a bit lengthy, and the third had me guessing (but that weird music after the dream? Bizarre). I haven’t begun the rest. I don’t have a lot of tv time in between work and life so I can’t devote as much time, even though I really want to finish it.

If you’re interested in watching some more French series, give this a go. They all center around a famous Paris monument so you’ll get a better look into the Palais Garnier for instance. They’re not really scary or thrilling, the French don’t like to be scared, but they’re interesting enough to devote an hour and half to.

To watch the series you will need Amazon Prime. I tried purchasing it in the iTunes store but it wasn’t available. That’s not really a surprise. There are a lot of French films I saw on the billboards at the theatre near my house or on the Morris columns that I really wanted to watch, and hoped I could find with English subs, but they’re not available in the iTunes store or on Amazon. When I looked this series up in Apple TV it took me to Prime. And then I tried purchasing it on Prime but you can only watch it with a PBS subscription. Personally I don’t mind paying $5.95 a month for the PBS add on, they show a lot of British mini series and tv films that you wouldn’t find otherwise, but if you’re just interested in watching this series you can sign up for the PBS free trial. It’s for 7 days.