A Love Letter to the Petit Bateau Ciré 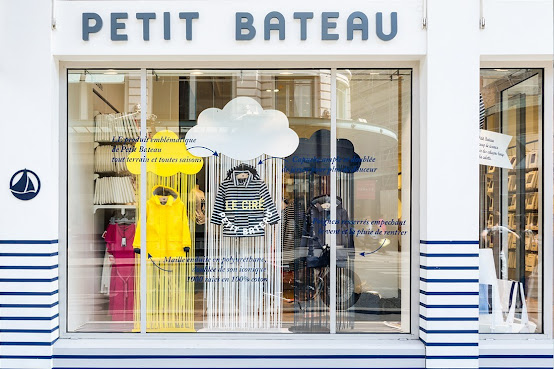 I don’t usually promote things. It’s not how I envision my site. I don’t allow ads. I write because I enjoy it, and I really do hope my site helps people along the way. I put money into this but don’t expect any out of it. Making money from this was never a priority.
I mention things because I genuinely want to talk about them. I talk about them either because I love them, or hate them, or what have you. They’re meaningful to me in some way. This is a post about something that I love.
Petit Bateau is an iconic French brand. Not well known in America, perhaps because it’s high street, but amongst the French, children especially, it’s a popular brand. It’s where they get their staples. You’re sure to find t-shirts, underwear, and most importantly the iconic Breton marinière shirt, and variations of it. As someone with a weird fetish for stripe shirts I may have some bias.

When it comes to the iconic raincoat or the ciré, France has Petit Bateau. But Petit Bateau didn't always sell women’s wear. It was exclusively a children’s brand until the 90's when Karl Lagerfeld had Claudia Schiffer wear a PB children’s shirt under her Chanel suit. The demand was so high that they began making adult sizes.

You would probably know their yellow waxed rain coat, as it’s their most well known piece. And as always the lining is the famous blue and white strips. Usually worn with the cuff rolled up to distinguish it's a Petit Bateau.

Around Paris I always saw the coat but didn’t bite the bullet until later. I should have bought it sooner. Now it’s the only thing I wear. I have a lot of coats and jackets. In total probably like 50-60 ranging from boiled wool to leather to cashmere to my RLX ski jacket. They all have a purpose and an occasion. I wouldn’t consider any of them an everyday coat. My Petit Bateau Ciré is not one of those. It works in the winter (with a Uniqlo down jacket underneath), but also during those weird Paris days where it’s not quite cold, but not warm. The only time I wouldn’t wear it is June-September because Paris is an oven.

The lining makes it heavier, and adds warmth. As it isn’t too heavy, you never feel suffocated, or weighed down. Since most Parisians don't use umbrellas, it's great for the rain (obviously), but most importantly for that weird drizzle and damp that seems to plague Paris. The humidity (a constant in Paris) always makes me burn up, but this doesn’t add to that.

I cannot rave about this jacket enough. I have it in the dark green, but have always wanted it in red. Unfortunately when I made my purchase they only had the shiny red available and I haven't yet needed a new one. The colors change each season. By far the most well known is the yellow version, which is available every season.

The quality is great. I’ve had no issues with blemishes to the wax. Even when I accidentally snagged it on my car door, no mark, no hole. It still looks exactly the same as when I purchased it two years ago, despite the fact that I wear it all the time.

I even wore it in Texas often as it was like my security blanket. Taking it off made me feel naked. It was my little piece of home when I felt completely out of place. It reminded me of the content time in my life, when I was in Paris and I felt secure. Back before I knew culture shock, back when I had the love (or so I thought) of my perfect boyfriend Christian Kinnersley. My happiest time. To me it’s so much more than a jacket.

In addition to the rain free feature, I don’t use a purse, and the pockets are big enough to fit my wallet, keys, glasses, and phone with room to spare. The buttons on the pockets also make it harder for thieves to steal your phone on the metro. I love that it has both a zipper and buttons, though I only exclusively use the buttons.

It’s not like other wax jackets. When I think of wax jackets, I think of Barbour, and every time Christian wore his, it always got wet. It never kept him dry. He also had to rewax it and you don’t have to with this. The wax is maintenance free. It’s thick, but feels soft and smooth to the touch. Most importantly it keeps you dry. I have never felt any leaks even when wearing it in a downpour.

In America I always had people asking me “where did you get your jacket”, “I love your jacket”, but unfortunately PB does not ship to the US. You’ll have go to Europe. I promise you won't be disappointed if you do decide to buy it. At 139€ it’s affordable, and at least for me, well worth it (considering the sentimental value attached to it). It is my most loved, and second to my black J.Crew Italian Double Cloth Wool Day Coat, my most well worn.