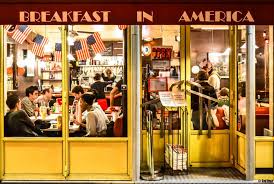 I know everyone the world over has their idea of breakfast, but American breakfasts to me are superior. There’s just something about it. It’s so Norman Rockwell. It evokes these pristine images of family. Everyone gathered at the breakfast tables with plates of bacon, eggs, toast, fresh orange juice, maple syrup, and pancakes with little square pats of butter. It’s a warm, happy feeling. Nothing feels more homey.

Of course what’s more American than breakfast in a dinner? Unfortunately most of those iconic diners are gone. The closest thing I had to one growing up was Denny’s. You could get a Grand Slam for $2.99. I can still take a Grand Slam if push comes to shove, but my personal favorite breakfast food is French toast. Good luck finding it in France.

The French aren’t big on breakfast. For them toast, a pastry, that’s breakfast. I never really found it satisfying. I like a pain au chocolat as much as the next French child, but after a while the exotic wore off and I just wanted a good old fashioned American breakfast. I wanted something that felt like home. Something like Denny’s.

There are a few (very few places) that do an American breakfast. Twinkie is one of my favorites (fresh carrot juice with bits of carrot pulp, yummy). Marlon does it's take, but uses bananas, and I prefer my French toast with berries. But by far the most American place in Paris is Breakfast in America.

It’s insanely popular so I’m sure you’ll find lots of information on it. But I wanted to bring it up because it got me thinking. I’ve probably googled “American breakfast Paris” a few dozen times throughout my French life and no matter what I always come back to Breakfast in America. Without fail. It’s my go to place for an American breakfast. It even has a go at the 50’s dinner feel.

If it were up to me I’d go there every weekend, but unfortunately they only have two locations and going to the Latin Quarter or the Marais on a weekend is never something I am want to do. Don’t fret however, they serve breakfast every day, all day. Next time you’re feeling homesick give it a try. Just be prepared to battle the line.