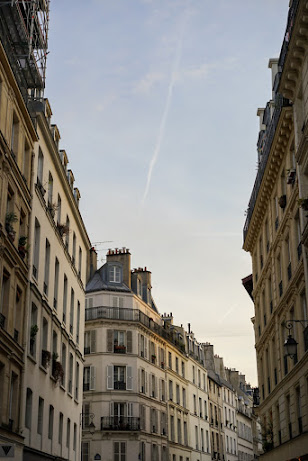 Going through a months long lockdown must be brutal. I traveled to Texas on March 7th, and the lockdowns began on March 15th? Or thereabouts. Texas, being a Republican state, only had a month long lockdown. Texas also being a big green state, it never felt like lockdown. I went to parks. I went hiking. I went kayaking. I went to the beach. I walked in the Hill Country everyday. There were a lot of things you could do and be socially distanced.

In May things reopened. We all had to wear masks, and unlike the news sites portray, people in Texas did wear masks. They were mandatory in my part of the state. You couldn’t go inside a business without one. If you were without, you were kicked out.

As far as “lockdown” and Covid are concerned I’ve had the better experience. My Coronavirus experience has never been close to what Parisians have experienced. I was lucky in a way that I wasn’t in Paris. The past year was torture enough without having Covid compound it. I'm already a prisoner of my own mind, I didn't need to be a prisoner in an apartment as well.

I can not imagine not being able to do things. Having a curfew. Needing a pass to be out. I didn’t experience anything even close to that. Most Texas bars and restaurants were still open. Including movie theaters. I realize I can’t foist my opinion on those that have had the opposite experience.

Despite the maskless on tv, despite going shopping, and living as normal as one can get, and the news reporting so many cases everyday, I have not contracted Coronavirus. No one in my family has either, including my extended family. Maybe we have good genetics, I don’t know the reason for it, but we’ve been lucky. Besides one guy at work (who was going to bars and partying so not surprised), I don’t know anyone who has had it.

Now that the vaccine is available I’ve been lucky enough to receive it. As Texas is a Republican state, and Donald Trump played favorites, we were lucky to receive the vaccines in December. I did not receive the first doses, as they needed to go to those most at risk. I’m not exactly sure why Texas had more doses compared to other states, but they began offering it if you called to make an appointment. They needed to use it, and so it was available. I suspect some of that had to do with refusals. I don’t know why people who could receive it, refused it. I can understand it being new and therefore being suspicious, however if it can help you, why would you give that up?

This is of course the Moderna and Pfizer vaccines. I bring that up because I know the AstraZeneca is not as effective, and when we have to show our vaccinations, most prefer you have had either the Moderna or Pfizer. Especially as this new strain threatens the world, and AstraZeneca seems ineffective against it. I’m sure any vaccine as this point is better than nothing, but we’d all prefer to be 94% rather 60% right?

Dr. Fauci recently said that those that have been vaccinated can begin to “socialize” again. It’s great news. Although I like the mask, and will probably implement it for some time. Despite what Gwyneth Paltrow claims, I know Asian cultures were wearing masks long before Covid out of respect for other humans. I don’t think it would be wrong for Western cultures to adopt that idea long term.

Anyhow I bring all of this up because France24 had an article stating that the government is looking to introduce a harsher lockdown in Paris. I’m sure the article has come out to gauge the public’s reaction. I’m sure it’s going to go down like a lead balloon.

I can’t remember exactly why Paris has yet to have the vaccine rollout the US has had, or even Germany or Italy for that matter. Fear of vaccinations? I think the EU also placed a larger order for AstraZeneca, which Macron doesn’t think is effective. Many people in Europe are actively refusing AstraZeneca outright. I don’t blame them. It really seems like a useless product. I am still confused as to why the [French] government paid 40m€ to consulting firms, surely that money would have been better spent on BioNTech’s vaccine? Suffice to say France isn’t on par with it’s fellow G8 countries.

I am not currently in Paris. I have an apartment, and I pay rent on it despite that it sits empty. I hate wasteful extravagance but I wanted to be able to come home to a home. I’m sad about it because I finally acquired an apartment that I love, a proper Haussmaniann, and I haven’t spent much time in it. But I did not want to go through a lockdown so I chose to travel with the plan to be back in Spring.

I’m sure I will get criticism for traveling. But I would never travel without being vaccinated. That’s just careless, and selfish, and speaks to the kind of human being you are (an asshole). Even though I am vaccinated, I adhere to all rules, tests, quarantine, and wear my mask like my life depends on it. I am germaphobic as is and a clean freak. But I also keep to myself, and only come into contact with others if it’s absolutely necessary. It is possible to be out in the world and act accordingly.

As my company is an American company, we have not shut down business, and in their part of the world life proceeds as if unchanged. There are photo shoots, and product launches, and fashion shows. I can’t just say “can’t come to work, Covid”. I can go into our office in San Francisco and NYC, and work in any of our other offices worldwide (for the most part), so there is no reason for me not to.

That said my job is now fully remote. They’ve embraced it. You can work in the office if you wish, but they love that we’re going out and seeing the world. They actively encourage us to work from wherever we want. We only need internet, and thankfully that can be found in any place. It would be great if I could attend meetings in London, but they know, while their offices elsewhere are functioning as normal, their office in London is not.

I realize that Brexit means the UK is no longer apart of the EU, and no one wants to touch Britain with a 10ft pole right now thanks to their new strain, so this news won’t apply to them, but the EU has said that it might not allow non-essential travel in time for summer. This is very disheartening, especially as America is making concrete plans. I hope it does not come to fruition. I have a month long, possibly two month, vacation planned for Italy, which probably won't affect an EU visa holder traveling from France, but you never know. I know it’s #FirstWorldProblems, but it’s something I’ve been wanting ever since I saw Marisa Tomei chase her “Damon Bradley”. I intended to finally get it this year.

It is after all of that explanation that I come to the point. I realize I say this as someone not imprisoned in my 40sqm apartment, who has had the luxury to live most of this pandemic normally, but this proposed lockdown sounds like good news. The article makes it sound like the proposal is a Hidalgo plot to steal the Presidency, but if this lockdown means they’re going to fully reopen in three weeks then isn’t it worth it?

Paris being normal again would be the ideal outcome. I just can’t imagine Paris being shut down for another year. If it’s guaranteed that they will open all restaurants, cinemas, and theaters, then is it not a small sacrifice for the greater good? I know Parisians are tired of their never ending imprisonment, but I hope this plan comes to pass. I hope France pushes a stronger vaccine rollout. And I hope that life in Paris goes back to normal sooner rather than later.