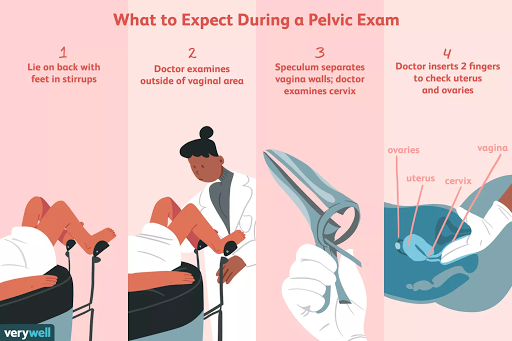 The dreaded gynecologist. I don’t think there is one woman on earth who enjoys the experience or has a positive reaction to the word gyno. Even if, like me, you only use female doctors, the experience is never a jolly one. Oddly enough I never saw a male doctor at the gyno clinic in Paris. Perhaps there was a reason for that.

I once dated a gynecologist (in America) who told me he only chose the profession because doctor's get paid a bonus of like $5000 a baby, and every time a baby was born it was cha-ching, cha-ching. Like most of my boyfriends he was a rich kid who came from money so a bit of a douche, but the crass telling of this never encouraged me the change to the male side. He was also really bad in bed. If a man knows nothing about the female body, why would I expect a male doctor to have any knowledge of mine just because he’s read a few books?

That said I wish I had better advice on finding one in Paris. I never had the nightmare of needing to find a gynecologist. My friend once asked me for a recommendation because she had been seeking one for a long time, but as I went to France’s version of Planned Parenthood, I never got to pick one. They gave me whomever.

That said I hated my French gynecologist at first. She was always so ornery. She would snap at me because she would get frustrated at not being able to speak English fluently, and it always felt like she was judging me. She was mean for no reason, and I couldn’t understand what I did to make her so angry. Everything I did was wrong.

But then something happened. In my 3rd or 4th year of seeing her we came to some kind of understanding. She was never exceptionally nice to me, but she began to be warmer, more friendly, even more lighthearted. I don’t know, perhaps she came to like the dreaded American who she could not converse with, and had to use Google to translate for.

But I didn’t always get to see her. One time I went when she was on vacation. I’m pretty sure it was the summer of 2015 so of course, and I was given some young girl. Let me just say this, I can’t remember exactly how long French students go to medical school, but I don’t think it’s for the length of time Americans do. In America it’s 4 years in university, 3 years in medical school. Then you’re an intern, then a resident, and then you become a doctor. You’re usually 29 before you earn that title. In France the girls working in Pitiè Salpêtrière (the hospital Princess Diana died in) looked 20. I suppose because it’s a free government program, at a teaching hospital, they allowed the interns to run free. And unfortunately I had the luck of having one that day.

Let me preface this by saying when you visit the gynecologist in France you are expected to strip. Completely. In America you are given a paper gown, and a sheet to put over yourself to cover your modesty. Some doctors even let you keep your top on. In France you are completely nude, bare assed on the table. You might get to keep your socks on. That’s it.

I’m not a prude, but I’m not an exhibitionist either. Walking naked around some doctor I met for 3 minutes before, being told to go behind the screen and strip, it’s not comfortable for me. The situation itself is a test in embarrassment as it is, being forced to be completely nude under doctor’s lights while someone looks inside your vagina, I don’t think anyone would find that a warm and inviting situation.

As it is another reason I hate the gynecologist (in France) is that every time I go I’m forced to do a pelvic exam. In America you do it once a year, your doctor would NEVER ask you to do it more than that unless there was a serious problem, and even then you can deny it. In France you’re forced to do it every time. It’s invasive.

My hate for the gynecologist also comes from an experience I had in my 20’s. I went to see one before going to Greece for a study abroad thing. I was getting a checkup with everyone before I left, and getting my vaccinations done, and I found this lady because she happened to be across the street from my house. Her offices were in a nice building, and it was brand new, and gave off inviting feelings. I didn’t have sex, there was no need to exam me, and when she examined me she forced the speculum into me. It was the most painful experience. I remember actually crying out in pain during it. She didn’t seem to care, and acted like I was being a baby. She continued with the exam and just ignored me.

So here I am buck naked in the hospital with this 20 year old girl I barely met 3 minutes before, legs in stirrups, waiting for this god awful humiliating experience to end. For whatever reason she sticks the speculum inside me and decides that she’s going to step away for a minute. Why? WHY?!? Well what happens? It falls out and goes crashing to the floor. So she scurries around to get a new one, going in and out of the room, and I’m there, legs wide open, thinking to myself what I would give to have my mean, judgmental, hobbit doctor back. At least she always tried to be quick.

That said, the service Le Planning Familial provides is a generous one. I have talked about them in a previous post. There is one nurse there who is the sweetest lady on earth. She always had to draw my blood, or do the follow up, and she could not have been more kind to me. There is one nurse there who is pure evil so it’s a toss of the coin. But they offer this service for free. You don’t even need to provide ID. I suppose it’s for discretion?

They must have done thousands of tests on me that would cost a pretty penny in America (even with insurance), and while I hated it, the French are correct in their belief that catching it before it starts is better than catching it when you get the symptoms. I had an English friend who’s Mother died because the NHS refused to do any cancer testing until it was too late. The French don’t do that. They prefer to run the tests so they can catch it before it hurts you, and hurts the system by way of cost of fixing what they could have prevented. It’s completely different from Anglo medicine. They truly provide "preventative" care.

I know my experience wasn’t the most helpful, but I hope it will help someone not go into this experience blindly. You will need to be completely naked for it. Be prepared.

And I hope you know there is a difference between doctors in France. That shouldn’t be a surprise, but there is also a difference in how they treat you, and what methods they believe in, and sometimes it clashed with my American ideals. In my opinion there is a huge difference when it comes to practicing psychology as well. I was forced to see one after Léo sexually assaulted me. I found their ideas on psychology completely at odds with what we’re taught in America, and after seeing her, they didn’t make any sense to me. But that’s also something to be prepared for. You have to decide if you’re going to assert yourself, or be like me and just hire an Englishman to be your GP.

But this different thinking isn’t always a bad thing. I was given an appointment with the gynecologist after my incident with Léo, and for added help they made me see a psychologist, at the government’s expense. They didn’t want to just check my body, they wanted to make sure my mind was okay too, and for that I will always have respect for French medicine, even if I don’t always agree with their methods.

As always if you need help finding a doctor, try Doctolib. They make finding a doctor simple. The process to obtain an RDV is so easy. I've heard they're not as widely available outside of Paris, but truly I cannot recommend them enough.