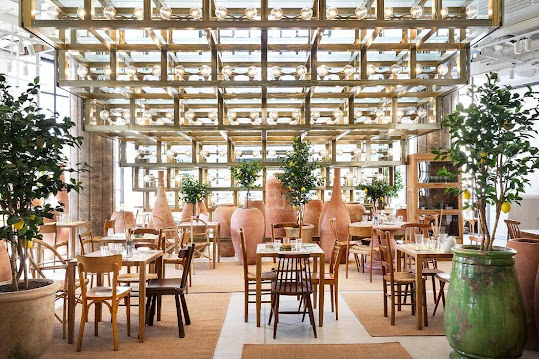 The brand has their own clothing line too. I have a few pieces from it that I picked up during soldes, which usually allows up to 70% off. I got them at a bargain, including the navy coat I wear a lot. I would advocate stopping in during a February or June, as they’re good quality at a steal.

Oddly enough I have never been in the flagship store. I’ve walked past it a number of times, but never went inside. As I mentioned on a previous post I shop almost exclusively at BHV (which is owned by GF), and when I lived in the 16th I visited their then new location at Beaugrenelle, which is like a smaller version of a department store. The only warning I would give for Beaugrenelle is to be careful when taking the escalator from the 3rd floor as it leads out to the food area on the 2nd. I accidentally carried my merchandise out and had to go back in. I was afraid they would think I was stealing. Embarrassing.

Galeries Lafayette even own that god awful Eataly in the Marais. If you’ve never seen Eataly, it’s this tourist trap with overpriced Italian restaurants on Saint Croix de la Bretonnerie that pushed out all of the Marais stores that previously sat on that street for decades. That whole area is an eyesore now. No one needs that many Flux stores filled with overpriced tchotchkes. There was a really cool paper store that had been there since I moved to Paris, and I assume the rent on the street got so overpriced they left. It’s a shame.

But we’re not here to talk about the gentrification of the Marais, we’re here to talk about a thing of beauty. Opened on March 28, 2019, but I didn’t step foot in it until December, the Galeries Lafayette Champs Elysées. I bring it up because it is truly stunning. The design of this store is unparalleled to anything else in Paris. It is visually amazing.

I wasn’t as much a fan of the concrete ground floor, but the restaurants, even the stairs leading from café Citron, is too beautiful for words. The store was designed by Bjarke Ingels in an Art Deco building that used to house the Virgin Megastore.

I would not advocate going to Champs Elysées for anything, but if you have to go down there, pop in here. Even if just for the experience. I didn’t care for the selection, as they seem to be catering to rich tourists so will gladly pickup anything I need at BHV, but you must revel in it’s beauty. It should be viewed at least once. If lockdown has you looking for things to do, it is currently open.