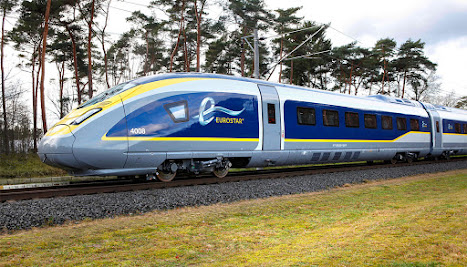 I have a pretty negative view of Eurostar thanks to a previous relationship. The few times I’ve gone to the Eurostar floor in Gare du Nord it made me so anxious that I was a nightmare to deal with and would lash out (I have really, really bad anxiety), or I’d end up crying buckets and feeling like a hole had been torn in me so I made the decision to stop putting myself through that. It was too much to handle emotionally and I found if I didn’t leave my everyday stimuli (by going to the station) it somehow made it easier to deal with that weekly loss (kind of like autistic children who need routine). Riding the metro home crying is not allowed in France, so I chose to avoid it full stop.

This post is not about my disdain for Eurostar, or the steps going through Eurostar, it's a quick note on the best times to book travel. I know everyone is anxious to start travel again. I know many have patiently been waiting to rebook those cancelled trips. Eurostar are currently offering e-vouchers until September 30th for any cancellations.

Oddly enough I have a lot of second hand experience with Eurostar. For two years I was basically the one to book travel for someone else. I have an idea of the best time to do so because I spent every week on their site trying to find the best deals, and enticing that person to come by finding dirt cheap tickets they couldn’t make excuses not to buy.

Obviously the £29 pound tickets are what you want to nab. If ever you see that sale, snap it up. The most expensive are weekends and Mondays. You have to remember people live in Paris and commute to London for work. Or at least they did before Brexit, so people would come home on Fridays and leave on Sundays or Mondays. People also like to weekend in Paris. They are always going to be expensive days.

The next tip is to buy the ticket two weeks out. Always. Eurostar isn’t like the airlines. They don’t miraculously discount their tickets if they have a bunch left over closer to the date. They own the monopoly, and they don’t care about empty trains. You will not find last minute deals. The price will always be sky high the day of. There is no getting around that. If you don’t want to pay £300+ roundtrip you will need to buy the ticket 14 days in advance. Currently the price is £49.50 for tickets in advance. The £39 tickets begin in June. You can see their fare calculator here. This really is the best tool. I can’t tell you how many hours of my life I spent pouring over that fare calendar.

Just remember trains start at 5:40am and end at 8pm. I feel like making it back to Paris at 11pm isn't a big deal. I’m someone who doesn’t like to get up before noon so I usually schedule my meetings midday. This is actually a good thing as the tickets are always cheaper during business hours. People like to travel before or after work, so demand is higher, and tickets are more expensive during those hours.

My biggest piece of advice would be to keep an eye out for those sales. Three months out you’ll usually find the tickets are around 35€ each way. But once you get closer to the date, and eventually that 14 days, you’re going to run into higher prices. I can’t stress that enough. They steadily increase as each day passes. Those two weeks before are the absolute worst.

And if all else fails check the Eurostar Facebook group. People sell their tickets there and you’re sure to find someone looking to buy, or looking to sell. The best time to search there is the week of as that’s when people find they’re not going to travel and they need to get rid of their non-refundable tickets. I know it’s a pain to wait for the day and hope for the best, but most people wait until the last minute. I’m not sure how they circumvent the name issue, I have never needed to buy second hand tickets.

Lastly definitely create an account. If you travel enough you’ll eventually make it up the tier of their frequent traveler program which entitles you to perks. Carte Blanche membership comes with taxi service and lounge access, and for that you need to spend £2,400 or make 32 roundtrip journeys. At first it may not seem easy to do, but you’ll get there (that’s 8 £300 trips), especially if your company is footing the bill and cost is no issue.

As of right now travel is only for mandatory reasons, but will no doubt change as Europe comes out of lockdown. Of course that’s assuming they don’t declare bankruptcy before then. Not that I would be sad. Eurostar deserves to lose that monopoly. And I don’t particularly want to travel to London for work so I wouldn’t mind an excuse not to.