Another Bid to Stop Cars in Paris 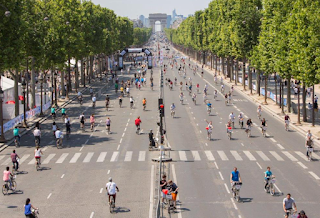 Paris is a small city. You can walk from end to end, north to south, east to west in one day. Probably even in one 12 hour period. It’s a densely populated city, and one of the reasons I like it so much.

But Paris is not small enough to not have cars. There are number of reasons you need a car. Perhaps not for every day use, but you will definitely need one more than once in your life here. From moving apartments, to making it to an appointment that needs you looking fresh, and not like you’ve just pummeled underground through a sardine can with 5,000 other people, like it or not a car is needed.

I once had to move from an apartment in the 20th to an apartment in the 16th and we had to drive on the periph, which took something like 60 minutes. Granted it was probably faster than driving through Paris, but had the car ban been in effect and the apartment was on say rue Petrelle (9th) and the other was on rue Val de Grace (5th)? Imagine? It would probably take 2 hours. There is no reason it should ever take that long to get from point a to point b in Paris.

Since Hidalgo became Mayor, in fact she was voted in during my first year in Paris, she has made it her mission to obliterate cars. Over time this change has happened. For instance you used to be able to drive along the river. I remember I was once laying on the chairs on the Seine near Hôtel de Ville when during a traffic jam two drivers got out of their cars and almost came to blows. That’s the last time I remember cars down there. Since then they’ve closed it, and now only people, bikes, and for now, Limes are allowed (although they’ve been pushing to control Limes too).

She also has plans to close the Pont d’Iena bridge from Champ de Mars to Trocadéro. Which is pretty insane as it is already hard to cross from Rive Droit to Rive Gauche on a good day without sitting in 30 minutes of traffic. Take away another bridge and you’ll have to go out of your way.

The driver I used to work with, who was tasked with driving me every day from the 16th to the 15th, used to tell me “she hates cars, if it were up to her there would be no cars in Paris”. Seems to be she’s slowly getting her wish. But at what price to everyday convenience?