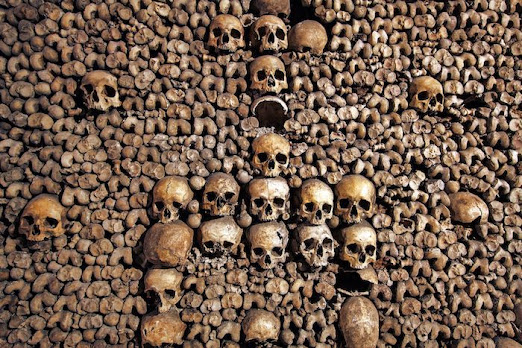 If anyone watched “Chapter 9” of Lupin you will have learned a bit about the Catacombs. If you have visited the Catacombs you will be aware that there is much, much more than what you see. I remember the day I visited the Catacombs because that was the first time in Paris (for me) that it snowed. It was very brief, and turned in to water as soon as it hit the ground, but it was snow. I marveled at it briefly and then walked into the museum's gift shop which is above ground.

The Catacombs themselves are not the most interesting. It really is just a bunch of bones arranged in dark tunnels. If anyone doesn’t know the history here’s a short version; The Holy Innocents' Cemetery in current day Les Halles was so full that they had no place to put all of the bodies. It had been in use since the Middle Ages so not that surprising. At one point they started to throw them in the Seine, but the bodies were so plentiful that they begin to rise higher than the Seine itself. The city had to do something so they moved all of the bodies into the "quarries of Paris" in the 14th.

The tunnels themselves are much more extensive than the tour allows. The Catacombs are only a small part of the entire quarry system. I’m surprised that Paris never caves in considering. I’d like a geologist to explain that to me sometime.

When I lived on avenue de l'Observatoire, I would have to walk up Saint Michel to get to the nearest Franprix. Every few days or so I would pass a bunch of kids who were climbing down into the tunnels from the entrance. It used to piss me off because sometimes they left it open and if you weren’t aware (like you were looking at your phone for instance) you’d probably walk right into it. If you saw Lupin you'll know how steep of a drop that is.

It’s strange but there are underground raves and parties sometimes. I’ve never been to one but you hear stories. Not that I’d ever want to go to one. It’d give me An American Werewolf in Paris vibes and I am not down (I loved that movie as a kid).

I’m actually surprised Paris hasn’t developed it’s own mole people. Next time you’re walking around Paris know that there are probably people below you. You just don’t realize it.