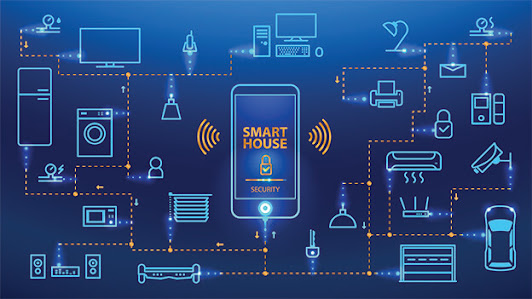 When I was like 12 they had a tour of the Microsoft Smart Home with all of the tech that they were creating. It was something to look forward to. Sure 20 years later and Microsoft didn't exactly deliver, but looking back at it, all of that stuff then that seemed impossible, is stuff we now have. We're slowly getting to “The Jetsons”. Personally I can't wait to become Byron Gogle (minus the chip implant and flavor balls).

Coming back, after being used to everything being automated, was an adjustment, but I took the steps needed to bring that same energy. My building may have been built in 1932, but my apartment is very much in 2022. Once I got used to the Home app, I sought out anything to make my life easier; lights that come on automatically when you get home, air purifiers that sense air quality, my little robot cleaning when I'm away to ensure there's no dust when I get off the plane, even having the curtains open automatically to wake me up naturally in the morning, I fucking love tech. And don't we all feel just a little James Bond casually saying "hey Siri.." and Siri makes it happen? Back during iPhone 4 days I hated Siri, but I've grown to love Siri now.

One thing about Paris, which sucks frankly, is that there are a lot of burglaries. I hear about it online, but the chatter seems to have grown louder lately. It’s almost daily. Someone mentioned in our group that they were home, asleep, in the middle of the night, and someone woke them up trying to break into their flat. Another person mentioned that thieves use hydraulic lifts to break those cute little bars that run up and down and to the sides of your door. You know, the ones that are supposed to make it impossible to crack because they literally slide into the floors. According to the police (from someone who was broken into) there are something like 100 break-ins a day in Paris. The cops don't have time to investigate every one so most people will never get justice, much less get back the things that were taken.

You should definitely speak to your Syndiq or your Guardian if you're ever worried or see something suspicious. They are the ones that run your building, and they are the ones who are supposed to ensure you building's security is as infallible as possible.

Personally my Syndiq sucks, and I'm not even sure they exist if it weren't for the fact that someone takes the bins to the curb every night. Instead of depending on my out of sight Syndiq I got a few little gadgets to connect to HomeKit. They don't exactly turn my flat into Fort Knox, but they're working on it.

I work in tech so I hear a lot of Apple hate from the devs and engineers (even though our work laptops are Macbook Pros), but I am an Apple user through and through so I only buy things that can provide Apple integration. Amazon has a lot of stuff for Alexa, and you can even use Alexa on your iPhone (via app), but I’m Team HomeKit. Apple is paranoid and for that reason I prefer Apple security. Bonus points if your products are all Thread devices, but so far only one manufacturer has created those.

You can find plenty of HomeKit devices on Amazon. The only issue with Amazon is that it has a lot of off brand Chinese products. I watched The Perfect Weapon and got thoroughly creeped out. I wanted to stick with things Apple vouches for. I don't want third party apps. If your products are Thread products this should give you greater peace of mind.

In America the Apple store has pages and pages of gadgets, but in France, not so much. However Apple and Anker have a partnership, so I ended up going with Anker's Eufy brand, which I purchased on Amazon (because I’m a Prime addict). I know it's still Chinese owned, but I can't find anything that isn't. Ring sells a kit if you’re into Alexa. They promise to offer Apple integration in the future, but as they've been announcing it since 2019, I'm not sure you'll get it anytime soon. For now you can try using Homebridge if you don't mind third party integration.

You can buy Eufy's gadgets separately, but I opted for the kit since I don't already have a HomeBase. Again if your device is not Thread supported, you definitely need a Homebase in order to make the devices work. With the Eufy kit you can't make your HomePod a base.

Now I'm not down with having cameras in my home. I keep all of the cameras on my tech covered as it is. They're too hackable. But I do have one in my apartment's entrance, which is a small room, that doesn’t give a view to the rest of the apartment. I only turn it on when I’m not in Paris. I would much rather have it outside, pointed at the door, but in France it is illegal to film people.

The kit I bought does not come with the camera, but it's easy to add on. With the HomeBase you can add lots of other things. I would suggest looking into things like smoke detectors, flood detectors, radiator controls, there are a lot of very useful devices. If you’re willing to pay more, you can even have different brands, and not need a base. They need to have Thread capability in order to talk to each other but this reduces the need for a base.

I would definitely suggest owning at least one flood detector because in Paris someone is always, always complaining about water damage or leaks and how they now have to pay 10,000€ to redo everything because their neighbors leaked into their flat. Also see my post about home insurance. This is why it’s so important.

So the kit Eufy provides comes with one motion sensor, two door sensors, the Homebase, and a keypad. I think the pad is just a cute little throwback to the 80's when you had to disarm your security system. Personally I like it because it's nostalgic, but it's not necessary because everything can be controlled through your phone.

Or one thing I really love is being able to control it though my Watch. I don't even take things with me when I leave the house anymore. I stopped using physical cards a long time ago. All I need is my watch. It’s bliss.

The motion sensor is pretty self explanatory. Put it in a room, preferably somewhere high and unobscured. It has a range of 9ft, and it will alert you when someone is in that room.

The thing I most wanted were the door sensors. There are two pieces; one for the casing and one for the door. They connect by magnet. When they sense that they are no longer connected, the alarm goes off. If you want to really go old school, you can even teach it to chirp out of the base every time a door or a window is opened.

The only real issue with the system is that the alarm’s siren comes out of the Homebase. It's not something that can be heard outside. Most people complain that it's not loud enough. If you buy Ring you won't have this issue because they sell an outdoor Ring siren.

But the great thing about automation is that you can ‘teach’ your devices to work together. You can set up so many scenes like making your lights in your house flash when a leak is detected for example, or in this case if you have HomePods, you can teach the system to make the alarm siren out of your HomePods. Personally I wish my HomePods were louder, but at the very least your neighbors above, below, and next to you will hear it. The sound should be loud enough to alert them that something sus is going down.

If you geek out on tech like me, or if you just want to make your home a little more secure, definitely look into all of the devices on the market. I don't own my apartment so I'm not going to professionally install a system (do they even have a Brink's here?). I find that this little system fulfills my needs.