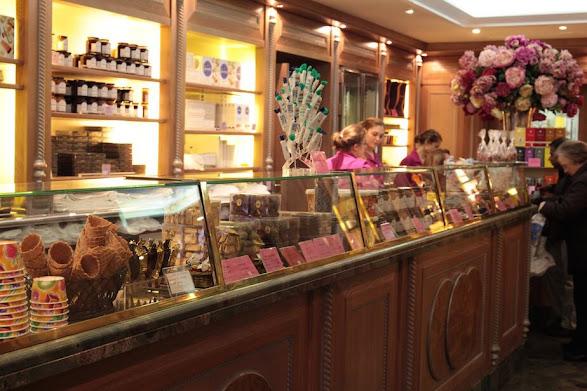 It’s funny that it took Ben Affleck and Jennifer Lopez to bring this up, but you live here long enough you care less and less and become immune to everything. And yes, I am way too invested in them. I’m a terrible romantic who is consumed with the idea of love beating all the odds and obstacles. Their love is so cute. I'm sure J.Lo is working on a romcom about it (yes qween of romcoms).

I lived on Ile Saint Louis when I first moved to Paris. Great place to stay from a tourist perspective, terrible if you plan to actually live here. Berthillon popups are all over that island and I never realized that they only exist there. Oblivious stays being oblivious.

I won't bother to go into the history, LeMonde does a good write up here. I don’t know why the hype. By Paris standards it’s not old (1950's), but they must have a brilliant PR campaign and now the legend lives on.

I love that it’s called “luxury ice cream” (what even), which is totally a French invention because luxury ice cream is not a thing, but I digress. I wasn’t impressed by it. But it’s iconic, it brings the tourists joy, so sure if you’re in the neighborhood give it a go. Be aware they do have Grand Vacances hours and are closed end July to August.

Oddly enough Ben Affleck was in town a few years ago with Jennifer Garner and they were mobbed at the Amorino in the Marais. I remember it because I worked around the corner from it at the time and it was big news. I would say give Amorino a go. I dislike crepes but I like their dark chocolate version.