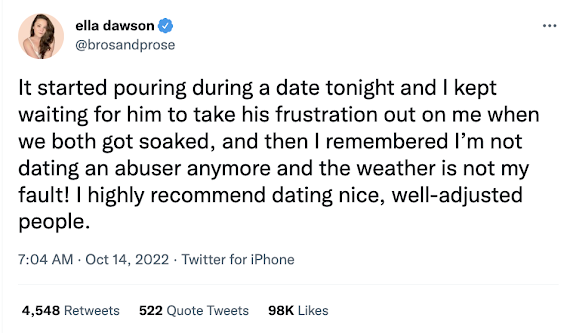 This is off topic but I want to bring this thread to more eyes because I realized, yet again, while reading it, how important it is for women to share their stories. It makes me feel less alone, it makes me feel less ashamed, and it allows me to come to terms with emotions that rear their ugly little heads. Emotions that illicit natural responses to trauma.

You cry because you feel pain, even if that pain was something you thought you moved past. In my relationships with men they always hit me randomly. Someone does something or says something completely innocuous. It means nothing in the grand scheme of things. It shouldn’t illicit a response but boom! something comes from the depths and it reminds me that I was in an abusive relationship and I am not okay. Despite knowing this you still beat yourself up over it; a) for feeling it in the first place, and 2) for it being something so trivial. Abuse begets abuse.

One example of something innocuous? I feel stupid when I have to explain, to an English boyfriend, why I don’t feel like “I’m allowed in London”. It’s absurd. Any rational person wouldn’t have a trauma response to an entire city. But most people didn’t have a relationship with Christian Kinnersley, who took every opportunity to beat me down and make me feel like I wasn’t good enough. Including going to the city he lived in because we might run into his friends, he might have to introduce me to people he knew, etc, etc. Do you know how embarrassing it is explaining this to someone “normal”?

The first time I realized I had a lifetime of recovery to work through was when I was dating a guy. I made a joke about something from the area I thought he was from. He said that wasn’t where he was from and then I spent 5 hours (while I was traveling) agonizing and beating myself up over it. I thought he would think I was stupid, I thought he would dump me for being so stupid, I was sure I had messed up in some way. That’s not a normal response, and it shouldn’t be a response to a silly mistake. I don’t deserve that.

And yet here I was stressed out. Why? Because if he had been Christian Kinnersley he would have berated me. He would have punished me for it. He would have made me feel worthless. He would have used it, at will, in all future discussions as a reason for why I wasn’t good enough for him, why I was beneath him, why I didn’t deserve to be loved by him. It would become a weapon.

Of course the worst is having to explain all of this in a new relationship, which I do because I am an open book and demand clear communication and honesty. This honesty leads to feeling like a broken burden anytime something comes up that makes me trauma respond. Even when they understand and make you feel loved, you can’t help but continue the cycle by beating yourself up for feeling it in the first place.

I have never gone to a meeting or joined an abuse group. It’s not really a thing in Paris. I wish it was but I only know of one association and it wasn't for me. Here is the thread: @brosandprose I hope it helps anyone who can’t understand or needs to understand abuse, and how it affects them long after it’s gone. Reading all of these tweets made me cry. But it also made me feel less alone. I hope it helps someone else too.